Seeing as we are quickly approaching the 100 day mark to the commencement of what we have termed the Stealth Sex Synod™ of 2015, today we are 112 days away, and the release of the Global Warming Encyclical Laudato Sii, that will be released tomorrow, this blogger will continue the latter thread that we started yesterday. To be perfectly honest, this encyclical is actually a large part of the TEAMFRANCIS Lord’s pastoral call to the run up to the Synod of Bishops, a topic that we will explore in greater detail in future posts.

Back to Laudato Sii. As anyone who has been following the scandal that is being caused by this “novel” Global Warming Encyclical, the proverbial fur has been flying. The “upset” parties for the most part, are members of the FrancisChurch, who feel that Francis, the orthodox schismatic and the atheist that will be presenting this encyclical to the world, have lost the BIG MO going into tomorrow’s release and conference.

Needless to say, the target of the FrancisHate™ is the Italian journalist Sandro Magister. To be more precise, the issue is whether Magister’s release of the encyclical, the one that he obtained from “his sources” in any way broke the embargo on the release of this official document. And I, your humble blogger got dragged into this heated argument on Fr. James Martin’s SJ Facebook page.

Just to set up this exchange, I was reading through FB, minding my own business when I ran across this entry:

And as you dear reader can see, your humble blogger made an attempt at a fraternal correction, not to mention getting another Spiritual Works of Mercy under my belt (to instruct the ignorant), to which a quite emotional response from Fr. Martin S.J. was forthcoming. On an aside, Fr. Martin is a Jesuit priest, a writer, and editor-at-large of the Jesuit magazine America. (see here) But I digress…

So naturally, I attempted to present the facts:

And naturally, the response was we can clearly read above. Please note, at this point, we are dealing with a small “c”atholic priest who is… how shall I say this… “bearing false witness” against Sandro Magister. Not only that, he is also leading his readers (souls) astray due to his obstinacy, best case scenario. But back to the story…

At this point, some of Fr. Martin’s readers joined the conversation:

As we can read above, the subject matter starts veering off the road into a discussion typical for FrancisChurch, i.e. ethics, ethical dilemma’s, “antagonistic reporters, not to mention conspiracy theory, etc. Yet up to now, the argument is a “he said, she said” argument (logical fallacy – appeal to authority).

What is more than a bit disconcerting however, it still has not registered to these people…”catholics” that they might be running afoul of the 8th Commandment, Fr. Martin included. Here was my reply: 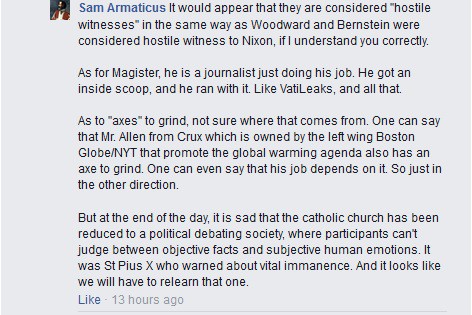 To which, the following appeared: 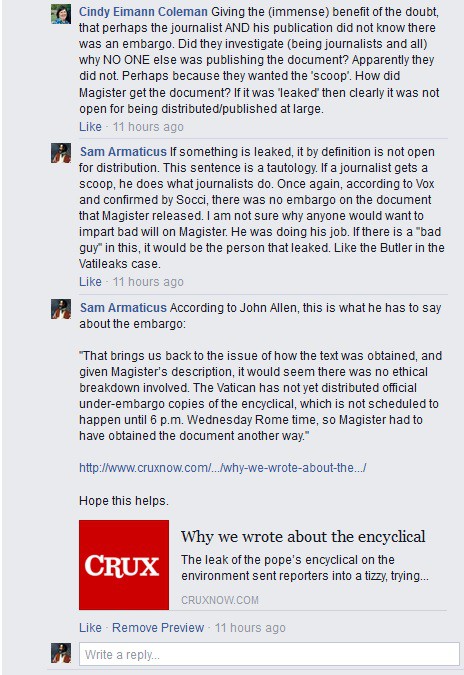 So this debate ended when the FrancisChurch designated “wizened US Vaticanista with no axe to grind” Mr. Allen confirmed that Sandro Magister did not break any “ethical” rules and that the document that he released was not under any embargo.

Concluding, the reason why I reproduced this thread is to demonstrate the dire situation of the mindset of the average US catholic layman and cleric 50 years after the “advent of the new springtime of Vatican II”. As we can see from the exchanges above, neither the laypeople or the cleric even considered that they could be wrong. They were acting instinctively. It is nothing different from them assuming that their political party was under attack, so they came into this discussion reflexively, with talking points in hand and guns blazing. They never even gave it a second thought that they could be wrong.

Furthermore, no matter how irrational the above behavior was at the time of the posting, not one of these individuals stopped to consider the severity of taking such a position with respect to their spiritual wellbeing afterwards. Not one of these folks stopped to considered that they were breaking the 8th Commandment. Wonder if they ever contemplated it? The reason that one needs to ask this question is that not one of these people came back and apologized since they most likely cast false aspersions on one of their fellow-man.

Looking at this less than seemly episode, is it any wonder that the institution that is the post conciliar church is disintegrating before our very eyes. One has to wonder what benefits or value does the post conciliar Catholic Church bring to XXI century society? If the Catholic Church is the faithful and if the catholic faithful are not taught nor understand the basic tenants of their faith, tenants that force these faithful to think rationally, objectively and critically, how in the world can they be in a position to propose positive, effective and meaningful “change” to the world that exists around them?

The short answer is that they can’t.

The longer answer is that these FrancisChurch people, whether it’s Francis, Archbishop Fernandez, Fr. Martin or his commenters, are not really in any position to bring anything worthwhile or meaningful to the wider global discussion, whether it’s spiritual or secular.

An excellent case in point of the above is the fate of the Aparecida Document, the brainchild of Cardinal Bergoglio (see here), that this document has suffered under the Francis papacy. To be more precise, not only do Francis’ coreligionists not put too great weight behind this document, they don’t even know what the thing means. Here is the relevant text from the Eponymous Flower blog: (see here)

The Fifth General Conference of Latin American Bishops’ Council in 2007 in Aparecida, whose final document was then still largely dominated by Jorge Mario Cardinal Bergoglio, Archbishop of Buenos Aires,  was in the forefront  of Latin American church leaders. Pope Francis register [stated] “exactly” that there are cardinals and bishops who never mention Aparecida. In turn, [it] can be heard by high church officials that they did not understand the “reforms of Francis”. And ever is the “model Buenos Aires” simply not applicable to the whole Church. It would involve “an experience, but not “the” experience of the Church.

So the question than becomes, what is the point of creating another document, even with the “theological structuring” of this document safely in cardinal Muller’s hands, (see here) that is in fact a “son of Aperacida” ?

You dear reader will have to stay tuned to find out.

But I will give you a hint: It is not what you think it is!

I will write more on just this topic over the next couple of days.