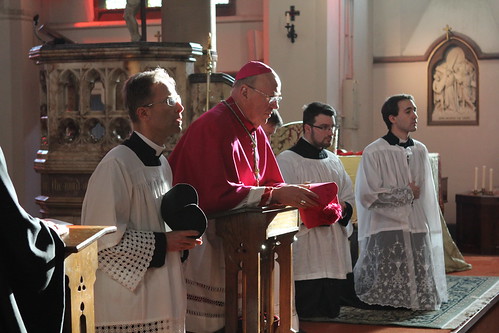 Today’s post will veer off a bit from the bi-Synod analysis theme and revert back to the stated mission statement of this blog, namely the chronicling of the Restoration of all things in Christ. There have been some notable developments with respect to the advance of Catholicism regardless of the reactionary 1960’s mindset that dominates a certain cabal in Modernist Rome these days. The below is a short compendium of what is happening on the Restoration front.

First we start in the great North West of…..jolly ole England. Dr. Jonathon Shaw, writing in the Rorate Caeli blog informs its readers that the Fraternal Society of St. Peter was given a church in the town of Warrington. Here is how Dr Shaw describes the relevance of this latest “friendly takeover” of this beautiful church from the Novus Ordo sect: (see here) (emphasis added)

This is part of a wider phenomenon in this part of England, where the Catholic population was traditionally the highest, thanks to the resistance of local Catholics to the Reformation, and after 1840 to Irish immigration. St Mary’s forms the third of a triangle of impressive, but potentially redundant, churches, which have been given to the care of the Traditional Institutes: two, SS Peter & Paul and St Philomena, at the north end of the Diocese of Shrewsbury, and St Walburge’s, Preston, in the Diocese of Lancaster, to the Institute of Christ the King Sovereign Priest, and now St Mary’s, in Liverpool Archdiocese, to the FSSP.

Two other northern dioceses, Salford and Middlesbrough, have recently established communities of the Oratorians of St Philip Neri, both of which celebrate Sunday Masses in the Vetus Ordo. Like the ICKSP and the FSSP, the Oratorians are now looking after fine historic churches.

Elsewhere in the country, the Fraternity of St Peter has a canonically erected house in Portsmouth Diocese, where they share a church, and an official ‘chaplaincy’ in the Diocese of Northampton.

And the significance of this is:

The significance of these developments is in part that, unlike the secular clergy, the Traditional Mass will not routinely disappear from these locations when a priest is moved, retires, or dies. It is a step of major symbolic significance, in which the local bishop is necessarily fully involved.

A further significance, if I may interject here is that a pattern is becoming evident in these moves. We have noticed a similar phenomenon with the Dome of Home (SS Peter & Paul and St Philomena) “friendly takeover” in New Brighton (see here). This phenomenon can be summed up as follows:

If you are an ordinary and have a dilapidated structure that is large, such as a 100-year-old church, give it to a traditional order.

Next we hop over to Switzerland, in the heart of the Novus Ordo sect’s rebellion against Catholicism and find out that a “few more bricks” have been laid. News comes in the form a group of students at the University of Fribourg. These students requested a “Novus Ordo” rite, however… The difference is that this “Novus Ordo” rite is characterized by: (see here)

The main particularities are the offering of the Sacrifice in Latin, with the Gregorian chant, ad orientem, and with the traditional way to receive the Holy Eucharist.

Now this is in no way an ideal situation, in that to Restore all things to Christ, the Novus Ordo rite must be EXTINGUISHED like the evil soul in the Bergoglian/Kasperian “theology done on the knees”, but then again, the “particularities” of this Novus Ordo “celebration” aren’t exactly what Bugnini and Paul VI had in mind either. So I guess we will just have to allow “graduality” to do its thing.

On an aside, I am relating this story since it was on account of a request of several seminarians made of Archbishop Lefebvre, to advise them as to a seminary where they could complete their priestly formation, that the SSPX was founded. Archbishop Lefebvre directed these seminarians to the University of Fribourg. It was on account of these students that the first SSPX seminary was opened in Fribourg Switzerland in 1969. This seminary moved to Econe in 1971, and the rest, like they say, is history.

And since we are on the subject of pre-extinguished Novus Ordo rites and seminarians, from the St. Charles Borromeo Seminary in Philadelphia comes news via the Musings of a Pertinacious Papist blog (see here), that present day seminarians have requested the offering of an Immemorial Mass of All Ages and what’s more important, the rector approved. So here we have another example that in the US seminaries, the trend back to Catholicism is alive and well, producing those future priests that Francis keeps warning us about.

On an aside, here is great post from dear friends of this blog at the Eyewitness blog about just this subject. (see here)

One more thing with respect to the post at the Musings blog and that is the following:

Prayer Pilgrimages will be holding its annual bus tour of historic churches in Chicago on Monday-Tuesday, December 28-29. Fr. Joe Tuskiewicz will be the celebrant of two High Masses in the Extraordinary Form to be held at the perennially popular St. Mary of the Angels [pictured] and St. John Cantius Churches.

The reason that I mention this particular announcement is due to the contained information that the Immemorial Mass of All Ages will be offered at St. Mary of the Angels Church. I mention this since as a young boy, an organization that I belonged to had Masses offered at St Mary’s at the start of each school year. I still vividly recall the ladies donning their mantilla’s as they were entering the church as if it was a week ago. Excuse the digression….

Next, we hop back across the big pond to the Church’s Eldest Daughter, i.e. France. Over at Fr. Z.’s blog (see here), we find a post with a link to a story written by Sam Gregg at the Catholic World Report. According to Mr. Gregg, the following is the case in France:

While Mass-attendance rates have steeply declined over the last 30 years, today France is witnessing the rise of an increasingly self-confident—and dynamically orthodox—Catholicism.

On October 30, readers of France’s main center-right newspaper, Le Figaro, woke up to the headline “La révolution silencieuse des catholiques de France.” What followed was a description of how those whom Le Figaro calls France’s néocatholiques have come to the forefront of the nation’s political, cultural, and economic debates. Significantly, the new Catholics’ idea of dialogue isn’t about listening to secular intellectuals and responding by nodding sagely and not saying anything that might offend others. Instead, younger observant Catholics have moved beyond—way, way beyond—what was called the “Catholicism of openness” that dominated post-Vatican II French Catholic life. While the néocatholiques are happy to listen, they also want to debate and even critique reigning secular orthodoxies. For them, discussion isn’t a one-way street. This is a generation of French Catholics who are, as Le Figaro put it, “afraid of nothing.”

When you have the TRUTH on your side, why should you be afraid? But I digress…

As to the article itself, I will allow this article to stand on its own merit, however I would strongly disagree with two minor premises of the post. One is the legacy of Lustiger as some sort of at “revivalist” figure. He wasn’t. The most appropriate analogy that would fit Card. Lustiger was the “cleanest of the dirty shirts” of the French Episcopate of his age. The second minor premise that I would strongly disagree with is the glancing treatment of the impact that the SSPX has had on saving the part of the French Church that survives today. As to the rest of the Franch Catholic Church, please see here. Therefore, the role of Archbishop Lefebvre cannot be understated and Mr Gregg does.

Summa summarum, the Gregg article is a must read, if for no other reason than as a pick me up in these closing days of Francis’ pontificate (see here).

As to OBJECTIVE REALITY on the ground in France, we go over to the Eponymous Flower blog (see here). Here is how the post bi-Synod atmosphere in Novus Ordo land looks:

The ambiguity of the Synod Final Report is showing its real impact in France. The French Bishops’ Conference seem to have been “overthrown with utter confusion” by the Relatio finalis on the subject of remarried divorcees. says CorrispondenzaRomana.

Please read the rest of the article and JUDGE for yourself what the REALITY on the ground is inside the Catholic Church of France and it is:

This is “a perspective of utter capitulation. The spirit of the synod is already blowing strong in the Church of France.

And seeing as how we are on a French/student/seminarian theme today, Fr. Z has another post about the situation at Notre Dame. The one in South Bend Indiana this time.

In his post titled Notre Dame U. v. Fr. Miscamble, NDCatholic.com (see here), we find out that the heretics that occupy this American seat of higher learning, have shut down Fr. Miscable’s involvement with the NDCatholic.com blog. This blog provided information about faculty profiles in order to help students navigate their way through the minefield of the post-conciliar gibberish known as a “c”atholic university education.

What I would like to draw your attention to is the fact that alumni are becoming involved in turning the Barque of St. Peter around. This is a very positive development. The reason for the significance of this development is that we know what the most important aspect of the post-conciliar church is and it is DOSH (that’s money for you non-UK types).

And who has the money?

Why the alumni do.

So what we have here is very positive dynamic being introduced, namely one that pits the faculty against the money. So in this particular case, the money might have lost this first skirmish, but guess who will win this war?

And on that happy note, I will leave off for today.

3 thoughts on “Dispatches From The Restoration Front”