TRUTH WITH A CAPITAL “T”

and we’re off and running today…

The (FRAUDULENT) WashPo/ABC polls gap is down to 2 points! If you recall, this is the same p 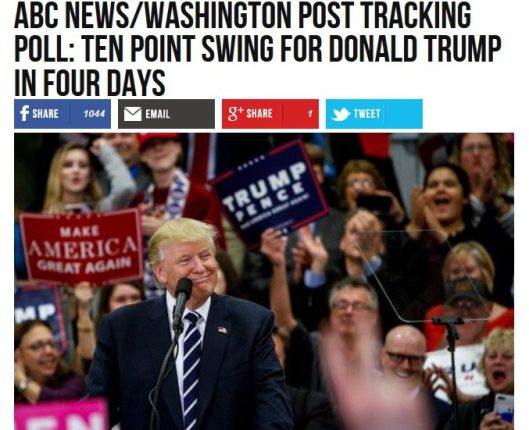 While the Establishment/DemoshevikParty/SickHillaryCampaign Industrial Complex have everybody’s attention focused on the “secret server”, WikiLeaks just unloaded another document dump. According to this new information we have confirmation that “money laundering” and other CRIMINAL RACKETEER ACTIVITIES were common place. Here is one such bit of info:

But the plebs have their circus and all eyes are on the Friend of Bill FBI Director Comey and his divining whether SickHillary, who has a serious mental condition and can’t remember 40 odd events during a 3 1/2 hour chat with said FBI, demonstrated INTENT.

Folks, you really can’t make this stuff up.

And after ‘splaining himself to Congress, FOB Comey ‘splains himself to his underlings… (see here)

In the link we read:

FBI Director James Comey released a memo to his agents explaining his decision to reopen the criminal investigation against Hillary Clinton.

“We don’t ordinarily tell Congress about ongoing investigations, but here I feel an obligation to do so given that I testified repeatedly in recent months that our investigation was completed,” Comey said in his memo, which was first publicized by Fox News.

Yesterday, the investigative team briefed me on their recommendation with respect to seeking access to emails that have recently been found in an unrelated case. Because those emails appear to be pertinent to our investigation, I agreed that we should take appropriate steps to obtain and review them.

In a post at the Daily Caller titled Early Ohio Numbers Show Path For Trump, Trouble For Clinton (see here) we can see and read this:

While over on the Trump side:

Recent polls show Trump with either a slight edge over Clinton or a tied race for the Buckeye state. The most recent poll cited by Real Clear Politics is a Remington Research poll that shows Trump with a four-point advantage over Clinton, 46 to 42 points. Other recent polls show a tied race, with both candidates receiving 45 percent support from likely Ohio voters in a Suffolk University poll taken just before the third debate.

Eventful week for the political hack and Secretary of Justice Lorreta Lynch. After taking the 5th earlier in the week, she tried to intervene in FOB FBI Director Comey’s letter to Congress. (see here)

And the punch line is: (emphasis and emphasis added)

What he (Comey) did not reveal, and as has emerged overnight from a report by the New Yorker’s Jane Mayer, is that Comey also acted in contravention to DOJ practices, and more importantly, acted contrary to the “preference” of DOJ head Loretta Lynch, whose infamous meeting with Bill Clinton on the Phoenix tarmac at the end of June will likely be reassessed in light of these latest revelations.

Like I mentioned yesterday, this server stuff probably isn’t anything, anything that can’t be resolved at a meeting in a plane on the tarmac, in a conversation about the grandkids.

I guess it’s just another day in the Obamanana Republic.

Couple things on this one. First, the $630k on Facebook ‘Likes’, this is the infamous South East Asia “click farms”. When reading any metrics relating to social media, please keep in mind how much of this VIRTUAL CAMPAIGN is on account of these “covert activities”. The $630k give one an idea of how much they are willing to spend to keep the VIRTUAL REALITY alive.

Next, in the post (see here) the following appears:

His comments were likely based on a March 2014 memo from the State Department inspector general in which the watchdog noted contract files for projects worth up to $6 billion had disappeared since 2008. With no paper trail to document the progress of those projects, there was no way for the inspector general to verify that the money ended up in the proper place, the watchdog argued.

The above missing $6 billion folks is just a part of where the funding for the propagation of the Cultural Marxist agenda comes from. It is this soft money/soft power funding, a la KIRCHENSTEUER that feeds the NGO’s that feed the global aberro-sexual, unregulated migration and redistributionist agenda, just to name three. And we know who the largest recipient of this largess is. Hint, he is sitting in the tree in the below cartoon.

More clarity from the Musings blog. In a post titled Incredible! Unbelievable! (see here), we get the following “fog lifting”:

Just to cover up for the Bamster!

ABC/WASHPO AGITPROPS have come out and admited that they have been RIGGING the POLLS. (see here)

Just yesterday we wrote about the very curious ABC / Wapo poll which seemed to show Hillary’s blow-out 12-point lead from last Sunday get cut in half in a matter of just two days.  But the ABC/Wapo enigma continues to grow today as their latest poll shows the presidential race has now tightened to just 2 points, which is within the margin of error.  Ironically, these new results do not reflect the latest FBI bombshell as polling was concluded on October 27th and it still includes an 8-point sampling advantage for democrats.

METHODOLOGY – This ABC News/Washington Post poll was conducted by landline and cellular telephone Oct. 24-27, 2016, in English and Spanish, among a random national sample of 1,148 likely voters. Results have a margin of sampling error of 3 points, including the design effect. Partisan divisions are 37-29-29 percent, Democrats-Republicans-independents.

So what happened?  For months we have argued that these goal-seeking reports (aka “Polls”) can be easily manufactured to show whatever results are desired by simply “tweaking” the sample pool.  WikiLeaks even exposed a handy guide 37-page poll-rigging guide on how to “include ethnic ‘oversamples’ as required” to manufacture the desired poll numbers.  But, with today’s latest ABC / Washington Post poll, the real “smoking gun” admission is revealed as the pollsters admit that the narrowing of their polling results are “not mainly about people shifting in their candidate preference” but about how their sample pool was constructed.

“Changes in the poll’s latest four nights compared with the previous four are not mainly about people shifting in their candidate preference, but about changes in who’s intending to vote.”

Who would have thunk?

Couldn’t have said it better myself! 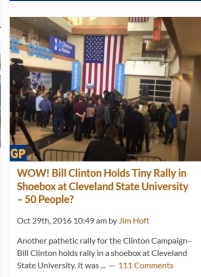