Folks, you can’t make this stuff up!

As my loyal readers can no doubt confirm, during the presidential campaign this past November, your humble blogger spent a lot of time on the subject of “FAKE NEWS”.

We identified this phenomenon (see here) and explained how it fits into the wider scheme of things (see here). We even pointed out how Fake News, known as “Coprophagia” in FrancisChurch, has seeped (no pun intended) its way into the ECCLESIASTICAL sub-set of human endeavor. (see here)

But nowhere in my wildest dreams could I have ever anticipated how big FAKE NEWS was to become with the advent of the Trump Presidency. Furthermore, I could not have imagined how overtly and crassly the FAKE NEWS LEGACY MEDIA would deploy this “tool of the trade” in the WAR FOR YOUR MIND that they launched against The Donald.

So just like the old saying goes, the one about “real life being stranger than fiction”, I bring you, what can be described as the FAKE NEW’S DAY AFTER!

And from the looks of things, it would appear as if the NYT could sure use a “fake news day after pill”!

In the aftermath of the Trump accusation that Obama wiretapped his phone during the election, an allegation which the flagbearers of the “truthful” (according to their various advertising campaigns) anti-Trump media wave, namely the Washington Post and the New York Times have vehemently denied, an unexpected victim has emerged over the past few days: the New York Times itself.

The reason is that while the NYT has repeatedly criticized and denied Trump’s allegation, it itself had written an article on January 19 titled, in the print version, “Wiretapped Data Used in Inquiry of Trump Aides’, and online “Intercepted Russian Communications Part of Inquiry Into Trump Associates“, by reporters Michael Schmidt and Michael Shear, which paradoxically corroborated much, if not all of what Trump himself said, and quotes the usual anonymous source who said that “wiretapped communications had been provided to the White House” as part of an investigation into “the business dealings that some of the president-elect’s past and present advisers have had with Russia.”

So with various conservative blogs taking the NYT to task over this seeming contradiction, and even the WaPo’s own fact-checker seemingly confused… 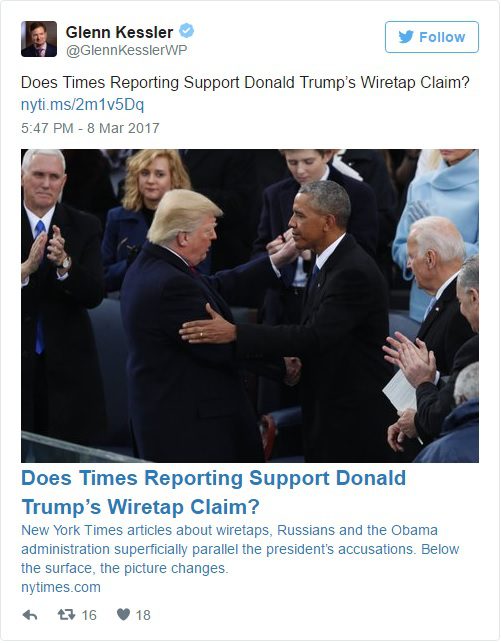 … today the NYT’s public editor, Liz Spayd felt compelled to address its January 19 article which, implicitly, substantiated much of Trump’s allegation, and to explain why that’s not the case.

She starts by saying that “Trump’s assertions, however overinflated, nonetheless echo certain aspects of The New York Times’s reporting from recent weeks. That, in turn, has allowed his administration to assert that the basis for his claims rests, in part, on reporting by The Times.”

On the surface, there are similarities. Both The Times and Trump have referred to wiretaps. Both have referenced White House knowledge of the investigations. And both have described efforts by officials from the Obama administration to involve itself in the continuing investigations of Trump and Russia.

Maybe Trump is not a completely raving lunatic after all. So where are the differences:

For one, as The Times (and others) has made clear, these investigations have been conducted by the F.B.I., intelligence agencies and Congress, not by Obama himself. The Times has also said Obama administration officials sought to spread intelligence about a possible link between Trump and Russia to ensure a trail of evidence for investigators, but it said Obama himself was not involved. And no Times reporter has claimed that any warrants have been issued to spy on Trump or his associates.

And there it is again: several months after we thought we would never again hear the old “Obama had no idea what was going on excuse”, it strikes yet again, only this time we find it very difficult to believe that Obama, who expanded the distributions of confidential NSA data to multiple offices just weeks before his final day in office, had no clue that Trump was being wiretapped.

There’s more, and this is where things get delightfully Orwellian, because as Spayd “explains”, the confusion is really just a function of readers being confused because, well, it’s complicated:

Distinguishing between Trump’s assertions and The Times’s reporting is essential. Yet readers at this juncture may be understandably confused on what is true and not in one of the most important ongoing news stories in the country.

More details about this pervasive “confusion” fanned by none other than the NYT itself:

Several readers have written in this week saying they’re having a hard time squaring The Times’s own past reports of wiretapping with the paper’s assertions that there is no firm evidence that any warrants for wiretaps have been issued. Readers also expressed confusion with The Times’s assertion that it would be illegal for a White House to receive information about such investigations, when its own wiretapping story in January said the Trump White House was given some information from intercepted communications.

“For months now the NY Times and many other mainstream news sources has been running stories based on anonymous leaks saying that a massive investigation was going on into Trump and company’s Russian dealings based on wiretaps and intel intercepts,” wrote John Penley of Asheville, N.C. “Now Obama officials are saying this all never happened so my question is this: Why have the NY Times and others been saying it has for months now basing their stories on anonymous leaks?”

So to eliminate the confusion, here is the NYT’s explanation of how the wiretapping of Trump and/or his associates, which eventually made its way to the White House – as per the NYT – didn’t really happen.

I reached out to editors in the Washington bureau to seek their help in clarifying the difference between Clapper’s — and The Times’s — assertions that no warrants had been issued, and the reference to wiretapping in the January story.

Elisabeth Bumiller, the bureau chief, said the January story was referring to information picked up from wiretaps and other intelligence collected overseas, a process that requires no warrants.

Still confused? Don’t worry: the NYT even has a Q&A to help you out of your cognitive dissonance predicament”:

There’s a lot to parse. And doing so, in a way that is clear to readers, is not easy when the subject matter is complicated and the information that reporters receive comes under strict terms of how it can be used. One reporter, Charlie Savage, produced a helpful Q. and A. explaining the law around wiretaps and key terms. But it didn’t try to show how Trump’s claims line up against The Times’s past reporting.

Sarcasm aside, what the NYT’s long-winded explanation boils down to is that Trump’s inner circle was wiretapped, but the difference is whether Obama knew about it or not. And if anyone harbors any gullible thoughts that the president who lied to the public about his knowledge of Hillary’s email server – arguably the biggest fiasco of her presidential campaign – but is telling the truth when he says that he has no idea whatsoever that someone, somewhere was in fact wiretapping Trump as the NYT reports, then we wish you all the best as you click away on all the other NYT “Q&A”s to help you in your misery.

… but it gets better…

A list of witnesses scheduled to appear at a House Permanent Select Committee on Intelligence Open Hearing on “Russian Active Measures” contains a glaring problem: the only technical experts scheduled to testify are from CrowdStrike. CrowdStrike is a firm hired by the Democratic National Committee (DNC) and has become the primary source of the narrative about “Russian hacking” of the 2016 election and has acted as a mouthpiece for the Democrats since last June.

And these are the Republicans who are doing this!

For the real news on this wiretapping issue, I bring you Stefan Molyneux: