As we head into the mid-term elections, an interesting piece of information came across this humble blogger’s radar. The reason why this subject matter is of interest to yours truly, and should  be of interest to you my dear and faithful reader, is that it provides an insight into a much, much larger issue. The larger issue is no less than: WAR and PEACE.

To be more specific, the issue pertains to the manner in which war is waged in what can be termed a post-Enlightenment world.

It would appear that alongside the conventional means in which war is conventionally waged, in Anno Domini 2018, war is waged through a WEAPONIZED #fakenews MEDIA.

Given the above, the OPTICS of what the cameras of the #fakenews media can produce, are no less critical to this HYBRID form of war, as are the bullets and artillery shells produced to wage a conventional war.

A good case in point is the current Sin-Nod of the Intrinsically Disordered that is taking place behind the Sacred Vatican Walls. Notice the OPTICS coming out of this aberration.

In order to get this effect, an unrepresentative sample of Catholic “yoots” have been corralled into a dog and pony show that they can in no way control. The game is rigged, the documents have been written before the thing even started and the “yoots” are just stand-ins, as if they were brought in from central casting.

But the OPTICS supporting the MESSAGING coming out of this Nod-to-Sin is that it’s all about the “YOOTS”!

But what happens when you don’t have an in-house RENT A MOB operation, like the FrancisChurch (see here), and there are no YOOTS to be had?

Well, you create the OPTICS.

Here and here is one way to do it!

And the best way to create OPTICS is to pay for it.

Heck, business is so good, you can even buy an entire caravan moving through Mexico straight for the US border!

Below, is a post from our favorite secular catholic website Zero Hedge (see here). In the post, we get a story about one of these OPTICS creation exercises that went horribly wrong. And when something of this nature goes wrong, it usually ends up in the courts.

Which is the case here…

Aside, this would appear to be just another instance where a “conspiracy” theory has transformed itself into a CONSPIRACY FACT.

“Paid protesters are real,” writes the Los Angeles Times, after a lawsuit filed by a Czech investor against a business rival spotlighted the seedy, and very real business of people hired to express fake outrage, support, and everything in between.

In the Bakala case, Crowds on Demand is accused of spreading misinformation through a website, putting on protests and organizing a phone and email campaign targeting several U.S. institutions with ties to Bakala, who got an MBA from Dartmouth’s Tuck School of Business and had an estimated net worth topping $1 billion earlier this decade, according to Forbes. –LA Times

Crowds on Demand provides pop-up “protests, rallies, flash mobs, paparazzi events and other inventive PR stunts,” according to its website.

The dispute between Bakala and Krupa goes back for several years, and has been the subject of inquiries by the European Commission and the Czech government, involving a formerly state-owned coal mining business, OKD, which Bakala assumed control of in 2004. Bakala has been accused of bribing officials to buy the government’s equity in the mining company at a below-market price, which broke a promise to sell company-owned apartments to employees before the company ultimately filed for bankruptcy in 2016.

According to Bakala, the COD smear campaign didn’t stop there, claiming that the company also called and sent emails to the Aspen Institute and Dartmouth College, where Bakala sits on advisory boards, urging them to cut ties with him. Bakala claims that Krupa threatened to ramp up the COD campaign unless the Czech investor coughs up $23 million.

Bakala, who holds U.S. and Czech citizenship, says in his lawsuit that all of those allegations are false and are part of Krupa’s extortion campaign. He alleges that Krupa offered to cease his campaign if Bakala paid $23 million for OKD shares owned by Krupa’s investment fund.

Crowds on Demand founder Adam Swart and Krupa neither confirmed nor denied that they are working together. They declined to answer specific questions about Bakala’s allegations, though Swart, in an emailed statement, called the claims meritless.

“Not only will I vigorously defend myself against the allegations in the complaint but I am also evaluating whether to bring my own claims against Mr. Bakala,” Swart said. –LA Times

“Defendants are pursuing a campaign of harassment, defamation, and interference in the business affairs of Zdenek Bakala, which they have expressly vowed to expand unless he pays them millions of dollars,” reads Bakala’s lawsuit (see below).

That said, it’s not clear that Krupa’s alleged campaign had the desired effect.

Elliot Gerson, an executive vice president at the Aspen Institute, said in an emailed statement that the institute has received calls and emails from “individuals associated with Crowds on Demand” and that the nonprofit’s general counsel has spoken with Swart “about this campaign of harassment.”

“From the beginning, we assumed that these manufactured communications were linked to political issues in the Czech Republic and Mr. Bakala’s high profile in that country,” Gerson said. “Nothing we received has altered our views about Mr. Bakala.” –LA Times

So paid protesters are a thing… 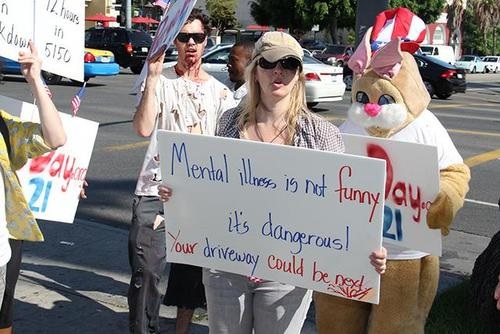 Bakala’s lawsuit brings to light an ongoing debate in the national dialogue over paid protesters. President Trump, for example, has repeatedly claimed that protesters have been paid by left-wing billionaire activist George Soros and others in order to disrupt and undermine conservative events.

“There are hundreds of lobbying firms and public affairs firms that do this work, though not all in the same way,” said USLA sociology professor Edward Walker – who wrote a book on the business of paid protesting, also known as Astroturfing. “Some only do a little bit of this grass-roots-for-hire, but things adjacent to this are not uncommon today.”

In 2014, ABC’s “Nightline” reported that a group backed by the beverage industry was hiring people to protest a soda tax measure – posting ads on Craigslist for paid protesters at $13 an hour.

During the confirmation hearings for Supreme Court Justice Brett Kavanaugh, many noted what appeared to be a man, Vinay Krishnan – who works for progressive activist organization Center for Popular Democracy, paying a woman named Vickie Lampron who was later seen in the Kavanaugh hearing.

Krishnan said that the money was given to people to pay fines in case they were arrested.

As the Times notes, paid protesters aren’t a recent phenomenon.

Longtime California political consultant Garry South, who was a campaign strategist for California Gov. Gray Davis, said it’s long been common for campaigns and political parties to pay people a few bucks or perhaps provide a meal in exchange for attending a rally. He recalled a 2002 rally in San Francisco where he said that tactic was used.

“It turns out, the San Francisco Democratic Party, to bolster the crowd, had basically gone down to skid row and paid people $5 or something to tromp up to Union Square,” South said.

But he sees a big difference between that kind of activity and the paid protests allegedly organized by Crowds on Demand.

“What’s different is the commercialization of the process,” he said. “It just contributes to the air of unreality that exists in this day and age with essentially not being able to believe your own eyes or ears. I don’t think it’s particularly healthy. But it probably inevitably was going to come to this.” –LA Times

Crowds on Demand, meanwhile, shamelessly boasts on their website that they were hired by a business rival to “cripple the operations” of a manufacturing business owned by a convicted child molester, which resulted in the hiring company buying the molester-owned business for “5 percent of its previous value.”

In another “case study,” COD brags about staging a rally to support an unidentified foreign leader who was visiting the United Nations.

“The concern was ensuring that the leader was well received by a U.S. audience and confident for his work at the U.N. We created demonstrations of support with diverse crowds.,” says COD.

“A lot of times, companies don’t want to be known for using this kind of strategy,” Walker said. “Crowds on Demand, they’re more out about it. … It is strikingly brazen.“