Today we return to the political sub-set of the Visibilium Omnium and draw our attention to the latest developments in Euroland and the upcoming BREXIT deadline. For those who somehow haven’t heard, Great Britain is supposed to exit from the European Union Project in three days, i.e. 29 March 2019.

Now I bring THIS below information to you dear and loyal reader, since the Catholic world has also recently noticed the SIGNIFICANCE of this upcoming EVENT.

And when this humble blogger says “Catholic world”, he ain’t kidding 👇

Therefore, SIGNIFICANT it is…

The manner in which BREXIT and this wider “conspiracy theory” affects you and me dear Catholics, is that we have found ourselves in a position where we find a GLOBALIST occupying the Throne of St. Peter.

So for your information dear and loyal reader, another very good overview is being republished below on this humble blog. It outlines how the pieces fit into this GLOBALIST puzzle from an analyst that your humble blogger references frequently on this subject matter. The piece comes via the Zero Hedge website. (see here)

Please read, meditate on and disseminate far and wide.

Concluding, and on a big picture theme, Rorate Caeli is commenting on Brexit. Think about how far we have come from the neo-Modernist attempt to pigeon-hole religion… REAL RELIGION, and place it into the MAGIC THINKING camp, when we, Thomists have known all along, that THEOLOGY IS IN FACT THE QUEEN OF ALL SCIENCES.

2+2=4 ALWAYS, EVERYWHERE and for EVERYONE!

BREXIT has a strong theological aspect and the CATHOLICS are finally catching on.  And frankly, the post-Modernist FrancisChurch will just have to deal with it.

What is in fact happeining folks is that we are finally coming the realisation that when dealing with OBJECTIVELY REAL Faith and Reason, there is no dichotomy.

When the Soviet Union fell in 1991 Marxism was dealt a near fatal blow. The crown jewel of communism was no more and descended into the worst kind of lawlessness.

Francis Fukiyama famously declared the End of History and the U.S. went on a ‘to the victors go the spoils’ looting of 1990’s Russia that boggles the imagination.

Marxists were left floundering. They were convinced the end of capitalism would occur and communism would win. Their identity was shattered on the shores of collectivism’s inherent inconsistencies.

It’s lack of basic understanding of why man acts and what he hopes to achieve when he acts that dooms all forms of collectivism to eventual failure.

The cries went up among the committed Marxists to then blame the U.S.S.R. that it wasn’t real communism. And their argument shifted to European Democratic Socialism as the superior implementation.

For the past twenty-eight years we’ve been inundated with this by leftists who refuse to give up on the dream. It’s still just warmed-over Marxism but whatever.

The End Of OPM

Now with the European Union facing a populist uprising across the continent they have reached the turning point with Brexit. And the conundrum is enormous.

Brexit is the single most important political event of this century. It’s one of the few things that is bigger than Trump. So, paying close attention to it is important.

That’s why it has so divided people. It represents an existential threat to the inevitability of modern liberalism. The European Union is the symbol of that inevitability.

Because once that inevitability is breached the European Union will begin to unravel before our eyes.

Donald Trump, for his part, understands this. He is pressing the EU on the issue of tariffs and NATO spending.

He wants to break down the artificial financial support the EU receives to fund its ‘superior democratic socialism’ that U.S. liberals of the Bernie Sanders persuasion believe in.

Famously, former British Prime Minister Margaret Thatcher said, “The problem with socialism is that eventually you run out of other people’s money.”

That’s why Brexit has to be destroyed. Because if it happens and Britain thrives as a result, it will deal a fatal blow to Marxism.

This is why they fear Brexit so much. The EU will fail.

We got a microcosm of that on Thursday when Theresa May left a No-Deal option on the table. The EU Council turned a one-hour rubber stamp session into a five hour grudge match. which resulted in the EU caving at the last moment, offering an unconditional two-week extension to Article 50.

And the EU caved. Finally.

That’s why the Brits have to be made into voiceless tax-cows milked until they are depleted. That’s what socialism is, a giant tax vacuum which destroys capital and innovation.

And that is where the EU is today. They have run out of the British people’s willingness to fund their dreams of creating a better version of the U.S.S.R.

So is Italy. So is Poland, the Giles Jaunes in France, Hungary, Austria, Spain, the Czech Republic, and even Germany itself.

In the U.S., Trump refuses to pay for Europe’s externalities like defense, education and medical care. He’s attacking the fundamental argument made for socialism today.

It’s a cornerstone of his re-election strategy.

The Marxism of places like Norway, Denmark and the post WWII Great Britain were heavily subsidized not just by the U.S. via NATO and the Marshall Plan but also the massive oil and gas deposits they had relative to the size of the populations they were supporting.

But with the North Sea and Groningen fields drying up so is the revenue. And it’s placing immense strains on the promises of these democratic socialist governments.

Trump understands this. It’s why he’s activated the U.S.’s energy production the way he has. And he’s saying quite clearly to Europe, “No more will we fund your wealth transfers by paying import tariffs to protect inefficient industries and subsidize Germany’s car industry.”

I’ve given Trump a lot of grief in the past two years over tariffs because the economics are clear. Tariffs hurt domestic consumers at the expense of politically-connected domestic producers.

But I have always understood his reasoning for attacking the EU the way he has. I agree with the sentiment just not the implementation.

The End of Empires

Back to Brexit. If the EU wins its fight with the U.K. over this treaty it will be a short-term reprieve for Marxism. They will win a six to nine month grace period.

So, as I said recently on Strategic Culture:

The Scots are pushing for independence to stay in the EU. Wales is beginning to consider it. Northern Ireland doesn’t like being anyone’s Trojan Horse.

They have thoroughly underestimated the will of the people and it will cost them what little cache they have left with voters. Remember, confidence lost in the institutions of government begets a loss of confidence in the money and their ability to manage it.

Because the global economy is rolling over. The data is everywhere.

The biggest proof is the central banks capitulating. Normalcy will not return to sovereign debt pricing.

The U.S. Yield Curve is a nightmare of convexity that is screaming, “Recession! Dead Ahead!” 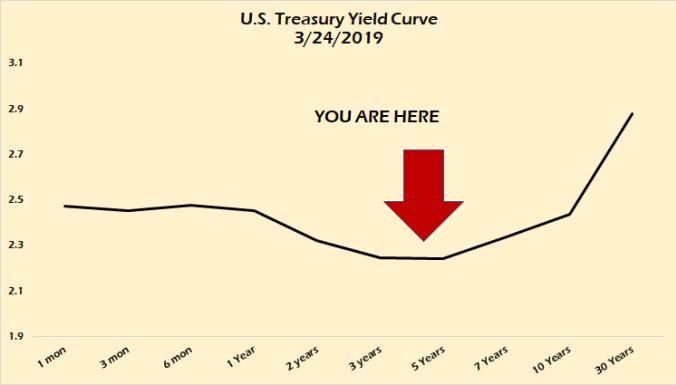 Everyone fiddles while their empires burn, including the central banks.

The U.S. yield curve is inverted between 3 months and 10 years. The markets are braced for a severe dollar liquidity crunch. To me it means they know Brexit is irrelevant at this point.

Brexit isn’t the problem. It is the symptom of the far larger one that you can’t steal your way to infinite prosperity.

And that’s why it is inevitable.