And it came to pass, that less than 24 hours after the below post, about the return of the WEAPONIZING DISPONDENCY mechanism in the 2020 presidential election, we get confirmation!

A lot of “weaponized dispondency” going around the #fakenews media these days.

Two of the best websites in the Anglosphere, the Conservative Treehouse and the Gold, Goats, ‘n Guns are trying to enlighten the isolated masses about just this PHENOMENON.

First, hope everyone is following Sundance at TCH daily. A lot is happening in the political sub-set of the Visibilium Omnium, et Invisibilium. The major issue, according to Sundance is the weaponization of the artificial despondency that is being generated by the Globalists and their #fakenews minions. ( SEE HERE)

Over in the economic sub-set of the Visibilium Omnium, et Invisibilium, Tom Luongo also explains the reality of the Globalist’s “weaponized despondency” operation, in this case to make it appear that the US is about to “disintergrate”. The poxy for this supposed US “disintegration” is the purported “demise” of the US Dollar. And according to Mr. Luongo, it’s one big scam.

Therefore, this humble blogger has linked and re-posted to the two sites so that you dear and loyal reader would gain a better understanding of what the really smart people are thinking and putting out into the public domain.

And finally, it is also a good idea to follow Dr. Steven Turley on his youtube channel. He produces two videos per day to also break through the disinformation and propoganda that is being produced to manipulate and fool you dear and loyal reader.

Today’s video pertains to a new company that has been set up to fight the post-Modernist neo-Marxist infiltration of corporate America. It is worth the watch and please pass it on through your social and social media channels.

The Big Lies: The EU Is Fixed, The Dollar Is Dying, & COVID Will Kill You

The Davos Crowd is desperate.

That much has been clear to me for months.

From the moment they tied COVID-19 to the breaking of the oil markets back in March they have worked like no other time in history to convince us the world we knew was gone.

The latest iteration of this big lie is the all-out assault on the U.S. dollar. Now for months a few analysts like me have been steadfast in reminding everyone that no matter how much money the U.S. prints in the short run, it is only doing so because of the extreme levels of latent and active dollar demand in the world.

So, there is narrative and there is reality. And reality is that today there is huge demand for the U.S. dollar regardless of what the headlines tell you.

That said, that doesn’t mean that demand doesn’t ebb and flow. And now that we’re on the other side of the first wave of this crisis period, marginal dollar hoarding has slacked off.

This is most evident in the dramatic rise in the euro back above $1.17 and the British pound breaking back to challenge $1.30. But in the grand scheme of things these are just relief rallies within primary bear markets. 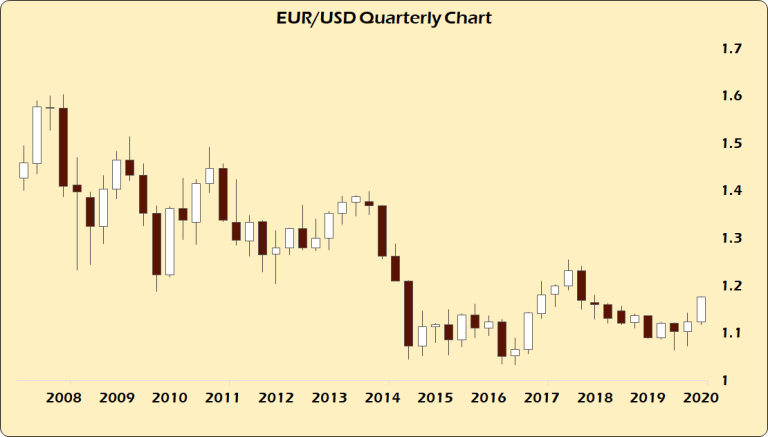 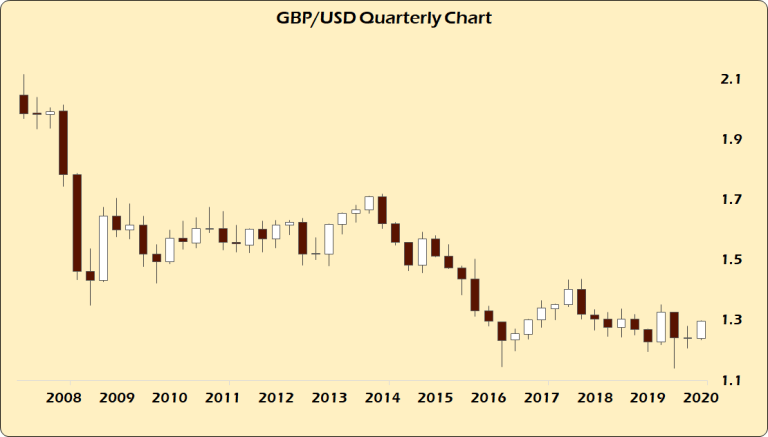 But in the past couple of weeks, coinciding nicely with a massive rally in the precious metals, there’s been a deluge of talk about the end of the dollar.

It’s easy to dismiss the perma-bears like Peter Schiff who has become a parody of himself at this point. But it’s not easy to dismiss it when all of a sudden Schiff is everywhere, taking the bait to be the guy who will tell everyone that the dollar is going to fail because, you know, money printing.

And, as an Austrian economist kinda guy, I agree with Peter, I just don’t agree that the dollar is going anywhere anytime soon.

It may gall him and other Austrians that the dollar can still be so thoroughly debased and still make up 62% of total foreign exchange reserves the world over or still dominate global trade (latest SWIFT Data). 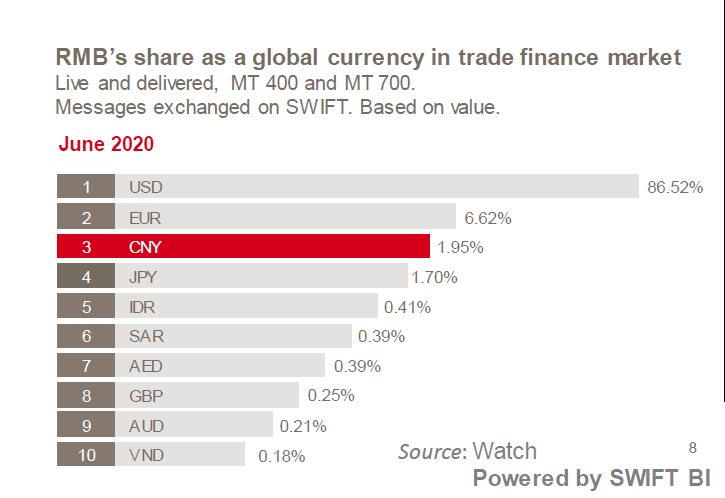 But with China keeping its capital account closed and the European Central Bank holding rates below zero destroying any possibility of anyone diversifying their capital reserves into euros, where else can the big pool of capital go at this point?

And just don’t tell me gold.

Because while I love gold, own gold, advocate for gold, gold cannot and will not resume a central place in our monetary system until the day the dollar fails.

And no one who matters right now really wants the dollar to fail. And that includes the villain-of-the-day, China.

But it’s not just guys like Schiff or Alistair McLeod who are calling the tune right now. They were joined this week by none other than members of the the International Monetary Fund , the mouthpiece of the Council on Foreign Relations and Goldman Sachs…

… but I repeat myself.

Goldman’s call is certainly reasonable, based on the idea that real interest rates have plummeted sending gold higher as the argument against holding it fails. 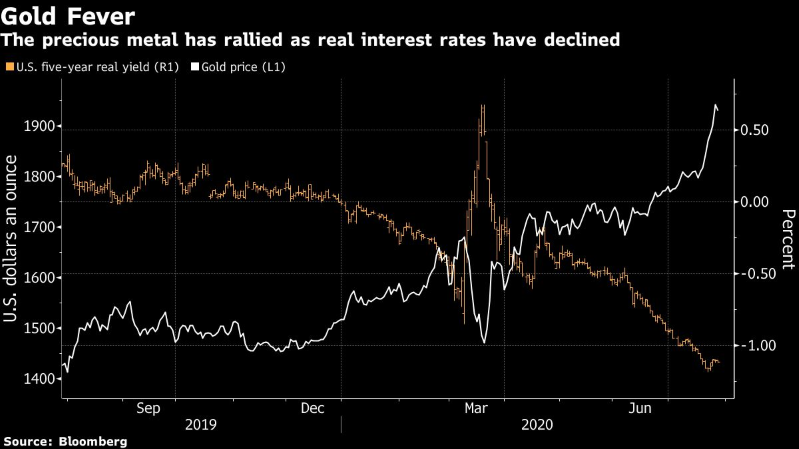 But when you have this many big stories planted in the media at the same time just ahead of an FOMC meeting, something is up.

They have all now called into question the U.S.’s central role in the global economy. This is a concerted effort to push this narrative during a period of extreme dollar weakness. They have tied it to the extraordinary measures taken by the Fed and the U.S. Treasury dept. earlier this year and the likelihood of another massive stimulus bill and/or bailout package between now and the election.

And it’s not even that I disagree with them, because I don’t. I just don’t agree that 2020 is the Year the Dollar Failed, no matter how tempting that title is to write.

Because, as always, you have to ask yourself the questions, “Why this? Why Now?”

The answer to those questions, in my opinion, is simple. They are timing this with the fundamental change to the European Union via the EU’s bright new shiny budget and COVID-19 relief plans which were agreed upon by the EU Council last week.

It’s a simple enough narrative that also neatly coincides with everything else we’re being bombarded with daily. And it goes something like this.

So given that gold and silver are the most manipulated markets on the planet doesn’t anyone think it’s strange that silver, of all assets, explodes more than $8 per ounce over a three-week period? Climaxing into the end of a delivery month on the COMEX?

Really? After nearly twenty years of watching the silver market I can tell you that when we see behavior this out of the ordinary it’s because the people who wag the tail of the market dog want it to happen not because they’ve lost the script.

Everywhere we look there is another instance of U.S. lawmakers fighting among themselves, like the fiasco hearing with Attorney General William Barr or the pathetic grandstanding over the size and scope of the next massive stimulus bill which will rob savers and future generations of even more wealth.

It’s Mayor Jenny Durkan in Seattle throwing out the Federal troops there while issuing orders to her police chief to not escalate the violence as the violence on the streets escalates.

It’s the relentless propaganda trying to create a ‘second wave’ of COVID-19 to scare us all into staying home, canceling elections, and screaming obscenities at people who won’t wear a useless mask.

Europeans will play soccer but the baseball games are cancelled because a few players tested positive for COVID-19.

Meanwhile in Europe, everything is fixed now that they’ve given the European Commission tax and spend powers they don’t legally have.

But Trump is shredding the Constitution by sending Federal troops to defend Federal property after 50+ days of rioting, looting and trying to set the Federal Courthouse on fire in Portland, Oregon.

Am I the only one who sees the game here?

A rising euro, a falling dollar, gold touching $2000, Merkel’s “Alexander Hamilton” moment, U.S. cities burning and the ones not on fire are under siege from his incompetence in handling the virus.

Economic depression mixed with incompetent leadership is supposed to lead you to lose faith in the currency of that government. That’s the big lie.

The sheer volume of it is supposed to make you believe a lie because how can you argue with such a vast array of evidence, right?

And in the curious case of the collapsing dollar I’m Tom Cruise. I’m not throwing the dollar out the window to its death. I’m calling bullshit and saying, “Nope I’m not buying what they are selling.”

I’ll buy that story in a couple of years but I won’t today.

Just like I’m not buying that I’ll die from the Corona-chan, that hydroxychloroquine and zinc won’t protect me from it or that the EU doesn’t have a whole lotta real work to do before anything in Europe can be reasonably described as ‘fixed.’

Look, not to be too blunt about it but the U.S. is approaching screwed in the long run. And that’s nothing but a shame because when I look around the world and I’m not seeing a whole lot of rule of law or even nods to constitutionally-protected individual rights.

When I talk with readers they uniformly weep for what’s happening in the U.S.

So, while we may be at a low ebb in this cycle, there’s still a way back from which doesn’t involve complete collapse. That choice has yet to be made.

But forces have been unleashed to make that choice for us, to destroy the United States and its most productive people, of that I have zero doubt. But not all forces are irresistible. Some objects are immovable and when your currency dominates 86% of all global trade that’s not something moving.

So, ignore the big lie of The Davos Crowd because when there’s this amount of pressure to manufacture a false reality it is more indicative of desperation than omnipotence.

And there’s a lot more distance along this road to travel.

Join My Patreon if you want help navigating the road to the end of the road. Download and install the Brave Browser if you don’t think Google should be directing where that road leads.