FOR THE RECORD: Corpus Christi 2015 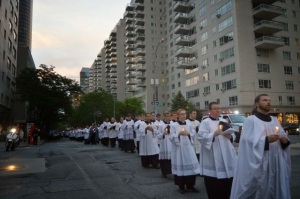 “The pope goes slow because he wants to be sure that the changes have a deep impact. The slow pace is necessary to ensure the effectiveness of the changes. He knows there are those hoping that the next pope will be turn everything back around. If you go slowly it’s more difficult to turn things back. He makes this clear when he says ‘time is greater than space.’”

Today we are in fact 109 days from the beginning of the Stealth Sex Synod of 2015 and your humble blogger is in catch up mode. Today we start with a not so random selection of three Corpus Christi processions in the Anglosphere: two in central London, one in New York City and one in Dublin Ireland.

The New Liturgical Movement has a story about TWO Corpus Christi processions in CENTRAL LONDON this year. The link can be found here.

The Wanderer has a story about the Corpus Christi procession in New York City that brought part of Manhattan to a stand still. The link can be found here and here.

Before we go to Dublin, here is an excerpt from Catholic Online to set the context of the Diocese of Dublin procession: (see here)

This Eucharistic procession can be a powerful witness to an age which has lost its sense of the sacred. We proclaim by our action that the Lord is truly present, giving Himself to all who call upon him. The faithful process out of the Church building and go into the street, singing songs of worship. Jesus Christ is not dead, He is alive. He has been raised from the dead. He still walks through our streets in this hour as truly as He walked the streets of Galilee.

And from The Irish Catholic, we read that a “huge” crowd, without putting a number on the “huge”, turned out for the Diocese of Dublin Corpus Christi Eucharistic Procession …on the grounds of Clonliffe College. (see here)

Yes folks, I kid you not!

The Dublin Diocese held the Corpus Christi procession on the grounds of “Holy Cross College (also known as Clonliffe College), located in Clonliffe Road, Drumcondra was founded in 1854 as the Catholic diocesan seminary for Dublin by Cardinal Paul Cullen”. The link on the Facebook page of Archdiocese of Dublin can be found here.

Oh well, so much for going out into the world. It would appear that the Irish shepherds are MIA.

But the good news is that there was a Corpus Christi procession through the streets of Dublin. It was organized by the Irish-Polish Society. (see here)

So I am thinking, maybe the Irish should import a group of Polish bishops to replace the existing Irish bishops. It worked for the Spanish when they brought in the Portuguese.

And in a year or so, maybe a second aberro-marraige referendum?