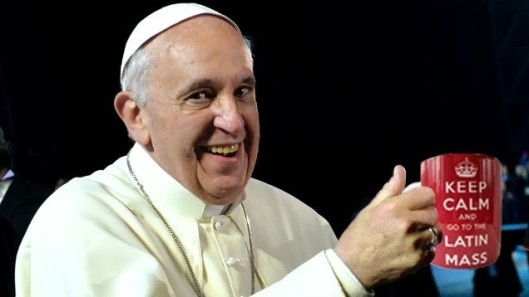 As we are getting closer to the Stealth Sex Synod of 2015, it would appear that other Catholics are beginning to not only see the superficial aspects of the “Francis bishop of Rome” gig, but are beginning to analyze what it is in fact that they are a witness to. Today I re-post from the Creative Minority Report. Pat Archbold has been posting an interview that he has done with Ann Barnhardt over the last few days. I find the fourth part as being quite good. (see here) Therefore I am re-posting it…

This is Part IV of my ongoing interview with Ann Barnhardt. In this part we will talk about the Pope. Now I am warning you, Ann uses very strident language to which readers of CMR are probably unaccustomed. Look, I know how Ann makes her points and I asked the questions. I appreciate her candor and intellect even if I don’t always share her style. Bottom line, if you don’t like strong language and insults, don’t read it. I don’t want to hear any complaints about her style. Disagree, fine. But if you complain about style or language choices, your comment will likely be deleted.

It is my choice alone to publish it here.

PA: I will admit that this papacy is a continuing source of frustration for me. Pope Francis has so much to say about myriad minutiae, that his silence in the aftermath of the Irish referendum and SCOTUS decision on sodomite “marriage” seems deafening. It should be obvious to everyone, including the Pope, that this issue is the tip of the spear that will justify all manner of Christian oppression in the west, but the Pope says nothing. The defenders of the Pope’s leadership will cherry pick a statement here and there as proof that the Pope believes strongly on this issue. But the lack of leadership on this crucial topic at this crucial moment is devastating, moreover with the damage done by the “who am I to judge?” fiasco, it is even more incumbent upon him to lead on this issue. What should the Pope be doing on this issue and why isn’t he doing it?

AB: What should the Vicar of Jesus Christ be doing? Um, practicing, teaching and preaching Catholicism. That would be a good start. He should be offering the Holy Sacrifice of the Mass in the Gregorian Rite at the Papal Altar of St. Peter’s basilica, directly above the tomb of St. Peter himself, every single day, begging our Crucified Savior there upon the altar, with copious tears, to have mercy on and to cleanse His Holy Church and the whole world. This should be broadcast/live-streamed and made available to watch on the Vatican’s website and whoever else wants to carry it, with closed captions in Latin above the various vernacular languages. The Pope should likewise celebrate Solemn Benediction every day, and recite the Litany of the Sacred Heart of Jesus, again in reparation for the horrific sins of the world – and not nonsense fake Marxist sins like “wasting food” or “using air conditioning”. No, actual real sins like sacrilege, sodomy, abortion, concubinage, and coveting and stealing other people’s private property and wealth, most especially by governments. Then the Holy Father should lead the world in praying the Most Holy Rosary – all 15 mysteries (You heard me. Fifteen. There are exactly FIFTEEN mysteries.), in Latin, for the crushing of and in reparation for the heresy of Modernism. He should conclude this daily rosary by reciting himself the Oath Against Modernism. Every. Single. Day. Once he gets that squared away, then we can start on formulating a plan for broadcasting him publicly praying the Liturgy of the Hours. The Liturgy of the HOURS. In Latin. Not the Liturgy of the Minutes in some barbarous tongue….

Oh, and there is also that minor matter of the Consecration of Russia to the Immaculate Heart of Mary….

Why won’t he speak out about these grave sins? Let’s start with abortion. Pope Francis had made it abundantly clear to all but the most pathetic of Pollyanna papoloters that he is a Marxist and thus a materialist. EVERYTHING he says is framed in a material context, including the wholesale of slaughter of pre-born children, which he has repeatedly characterized as a symptom of a “throwaway culture”. Because, you know, murdering babies is just one step up from not recycling. Further, he was reported as having said in an interview he granted to his favorite newspaper, the only newspaper he claims to read, La Repubblica, by his favorite journalist Eugenio Scalfari, an atheist Freemason, that the souls that do not achieve the Beatific Vision are “annihilated” and “there is no punishment”.

By Pope Francis’ words, and the deafening roar of his silence, we can clearly discern that he doesn’t seem to think that abortion is really that much of a problem. Like so many others in the post-Christian, post-modern culture, the justification for abortion is that it is better for a child to be aborted, and thus its soul annihilated, than for it to be born and live life on earth in poverty. Which is so odd, because he is constantly telling us that the poor are superior beings that we should kneel before and venerate, and that God loves and is “closer” to the materially poor – not the poor in spirit, but the MATERIALLY poor – more than everyone else. Huh. It’s enough to make a person think that Pope Francis maybe has an intellect rivaled only by garden tools.

Now to the question of sodomy. And let’s just cut to the chase and put forth the question that everyone is asking: Is Pope Francis himself a sodomite? While it would explain much, I doubt it seriously. I don’t think he’s a fag. I think what he almost certainly is is a sociopath. Sociopaths are all about “winning the game” and imposing their will on others. For some sociopaths the “points” in the game include money and sex. Bill Clinton, Jon Corzine, Jim Jones and Marcial Maciel leap to mind. But all sociopaths share the common pathology of the lust of power and the desire to impose their will on others. For some, like Pope Francis I strongly suspect, the “points” are in the form of wielding power within a political environment, which is how he views the Church and the curia – as a purely political organization. He gins up massive personal popularity with the full, giddy cooperation of the Freemasonic global media juggernaut, by ratifying and confirming people in their sins, most especially their sins against the Sixth Commandment, preaching a false gospel of moral laxity and permissiveness as “mercy”, religious indifferentism as “tolerance” and “ecumenism”, and personal indifference as “charity”. But, who am I to judge.

Now to the sodomites. The Vatican is CRAWLING with sodomites, and gurl, in the Francis era those nasty old queens are struttin’ like RuPaul late to a lipgloss giveaway at Sephora. Francis, being a politicking sociopath, formed an alliance with the Lavender mafia immediately because he knew that they were powerful, had numerous common goals and sympathies, including a visceral hatred of the Mass of the Ages, and that he needed them in order to push through his evil, populist agenda revolving around Sixth Commandment issues and Marxism. We knew for a metaphysical certitude that the Lavender Mafia was ascendant when Pope Francis named the notorious, openly disgraced and may I say, utterly repellant old queen, Monsignor Battista Ricca to run not only the Pope’s residence, but also the Vatican Bank. Ricca was shipped out of Montevideo, Uruguay, just across the water from Buenos Aires, in 2000 for being a promiscuous fag, carrying on an affair with a former Swiss Guard officer, getting the crap beaten out of himself while trolling gay cruising areas, and finally, getting caught in an elevator with a boy prostitute. Monsignor Ricca apparently lives by the credo, “Go big or go home.” When Pope Francis installed and fully “rehabilitated” Ricca in the summer of 2013, everyone with two brain cells to rub together knew that the sodomite problem in the Church would not only not be addressed, but would get markedly worse under Pope Francis, no pun intended.

While probably not a sodomite himself, Pope Francis, being a few dilithium crystals short of a warp core, is also probably quite susceptible to flattery, and thus doesn’t mind the fags he surrounds himself with, because they are probably amusing and charming at table, and tell Pope Francis how FABULOUS and BRILLIANT he is. Sodomite men, especially, tend to be shameless flatterers, which is why your 80 year-old aunt just LOVES her super-cute fag hairdresser and can’t understand why the mean old Church says that he and his anal sex partner/victim can’t get “married” and adopt pet children. (For me, it was my RCIA sponsor, not my aunt.) All because the fags tell their hags how GORGEOUS their outfit is… and then ruthlessly mock her as soon as she is out of earshot. Think of Pope Francis, the fag hag par excellence, sitting at Casa Santa Marta for his well-watered lunch with Monsignor Ricca dressed in a pale-pink argyle sweater, and a host of other desperately amusing fags in the Antony Blanche mold…

To Pope Francis, it seems, it is all a political game which he intends to “win” by any means necessary. And the sodomites are probably his most important and powerful mercenary army. And make no mistake, they are kicking our ass up one side and back down the other. Or, as someone else has so forthrightly put it, the Bride of Christ is Being Raped.