Many of the U.S. bishops have been disoriented by what this new pope is saying and I don’t see them really as embracing the pope’s agenda,” said John Thavis, a former Rome bureau chief for Catholic News Service. “To a large degree, the U.S. bishops have lost their bearings. I think up until now, they felt Rome had their back, and what they were saying – especially politically – would eventually be supported in Rome. They can’t count on that now.

Bishops have been asserting themselves as the sole authorities in their dioceses and as the arbiters of what would be considered authentically Catholic. Following the lead of St. John Paul II and Pope Benedict XVI, who appointed nearly all the current U.S. bishops, the prelates saw this approach as critical to defending orthodoxy.

Run of the mill left wing garbage. But that is to be expected from the AP.

Anti US bishops and pro Francis.

I wonder if this was how “collegiality and synodality” was understood at the last conclave?

Takeaway: What’s important is that these stories are being picked up by the MSM and the news aggregators. And Drudge is the largest. And it’s only a matter of time until the MSM starts getting wise to Francis. 🙂 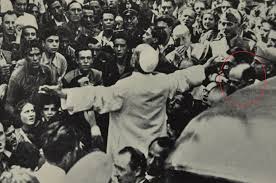 MESSAGE OF HOLY FATHER FRANCIS
TO CARDINAL AGOSTINO VALLINI
VICAR GENERAL FOR THE DIOCESE OF ROME
ON THE 70th ANNIVERSARY OF THE BOMBING OF ROME
[San Lorenzo, 19 July 1943]

To Cardinal Agostino Vallini
Vicar General for the Diocese of Rome

I am spiritually united with you, with the community of the Capuchin Friars and with all those who are gathered in the Basilica of St Lawrence Outside-the-Walls to commemorate the violent bombing on 19 July 1943, which caused severe damage to the sacred building and to the whole district, as well as to other areas of the City, sowing death and destruction. Seventy years later the commemoration of that particularly dramatic event serves as an opportunity to pray for all those who died, as well as for a renewed reflection on the terrible scourge of war, and likewise as an expression of gratitude to the one who was a caring and provident father.

I am referring to Venerable Pope Pius XII. In those terrible hours he made himself close to his fellow-citizens, so severely hit. Pope Pacelli did not hesitate a moment before rushing to the still smoking rubble in the San Lorenzo neighbourhood, with no escort, to bring help and comfort to the distressed people. On that occasion too he showed himself to be a caring Pastor among his flock, especially in the hour of trial, who was ready to share in the suffering of his people. Along with him, I would like to remember all those who in such a tragic moment, cooperated by offering moral and material help to soothe the wounds of body and soul, and by bringing help to the homeless. I would like to mention Msgr Giovanni Battista Montini, the future Paul VI, then Substitute of the Secretariat of State, who accompanied Pius XII on his visit to the district which had just been laid waste by bombs.

Pope Pacelli’s action was a sign of the ceaseless efforts of the Holy See and of the Church through her various structures — parishes, religious institutes, residential colleges — to bring relief to the people. A great many bishops, priests and men and women religious in Rome and throughout Italy resembled the Good Samaritan of the Gospel parable, bending over their suffering brother, to help him and bring him comfort and hope. This was a demonstration of charity that was extended to every human being in danger and in need of acceptance and support.

May remembrance of the bombardment on that dramatic day make Pope Pius XII’s words ring out: “Nothing is lost with peace, everything can be lost with war” (Radio Message, 24 August 1939). Peace is a gift of God which today too must find hearts willing to receive it and to toil to be builders of reconciliation and peace.

I entrust all the inhabitants of the San Lorenzo district, especially the elderly, the sick, and people who are lonely or in difficulty to the motherly intercession of Mary, Salus Populi Romani. May she, the Virgin of tenderness and consolation, strengthen faith, hope and charity, in order to radiate God’s love and mercy throughout the world.

With these sentiments, I assure you of my prayers and I warmly impart to you the Apostolic Blessing.