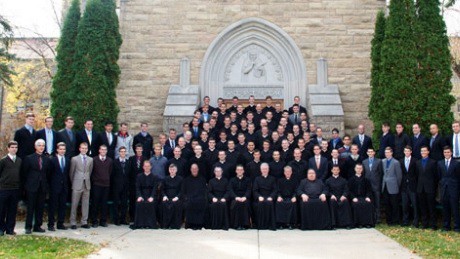 In yesterday’s post titled “Tłuste Lata” For Catholicism in Poland (see here) we chronicled the advance that Catholicism is making in the Polish Church. The advance can be seen in the growing numbers of men who are presently studying for the priesthood in Catholic seminaries.

Today, we turn our focus to the Catholic Church’s FIRST RELIGIOUS SOCIETY AMONG EQUALS, the Fraternal Priestly Society of St. Pius X. On the SSPX’s US website, (see here) via the DICI website, we are informed that a total of 53 new entrants have commenced their first year of study at SSPX seminaries. Furthermore, another 49 men have entered the pre-seminary phase who will take courses in the humanities before beginning their specialized seminary studies.

To provide context, since context is everything, I would like to draw your attention to the situation at the Seminary of Our Lady Co-Redemptrix in La Reja Argentina. La Reja is approximately 30 miles west of Buenos Aires. (see here) Just this year, 9 new entrants will begin their first year of spirituality and a further 14 will begin the pre-seminary phase. That is a total of 23 men just this year. When added to the 30+ seminarians (will confirm once I have exact figure but there are 49 seminarians in La Reja and Goulburn collectively), the total comes out to no less than 53.

While at the same time, over at the diocesan seminary of Buenos Aires, the number of seminarians is less than 30. (Once again, see here) And for further context, here is a comment from a friend of this blog, Mr Richard Malcomb who writes:

“Cardinal Jorge Bergoglio in his last year as the Archbishop of Buenos Aires had in his seminary a grand total of 28 seminarians.”
…which was a two thirds dropoff from what he inherited in 1997.

Before I go to the post, I would just like to remind all my readers that the SSPX’s Seminary Project in Virginia is underway. (see here) Last time we checked in, the slate roof was being installed. (see here) If you would be so kind as to venture over to their website and even kinder and contribute to this noble cause, your humble blogger would be most grateful.

On an aside, at this rate, it would appear that this new seminary will be needed just to handle the overflow from St. Thomas Aquinas Seminiary in Winona.

From DICI we offer this joyful news about this academic year’s number of entrants to the SSPX’s seminaries, as well as the total of postulants to the brotherhood.

The Society of St. Pius X is admitting a total of 53 young men to their first year of spirituality in its different seminaries for the current academic year 2015-2016.

In the Northern Hemisphere, the Seminary of the Holy Cure of Ars in Flavigny (France) is welcoming 14 new seminarians (4 Frenchmen, 4 Swiss, 2 Gabonese, 2 Italian, 1 Nigerian and 1 Pole) and 2 postulant brothers (1 French and 1 Canadian), as well as a pre-seminarian.

St. Thomas Aquinas Seminary in Winona, Minnesota (U.S.A.) is welcoming 12 new seminarians and 5 postulant brothers (all Americans), as well as 30 pre-seminarians who will take courses in the humanities before beginning their specialized seminary studies. [Read at STAS.ORG: 35 new vocations]

In the Southern Hemisphere the beginning of the new academic year in March 2015 saw the arrival at the Seminary of Our Lady Co-Redemptrix in La Reja (Argentina) of 9 new seminarians (5 Argentines, 2 Brazilians, 1 Chilean and 1 Guatemalan) and 3 postulant brothers (1 American, 1 Brazilian and 1 Dominican), and of 14 pre-seminarians as well.

At Holy Cross Seminary in Goulburn (Australia), 8 new seminarians had entered as first-year students (2 Australians, 2 Filipinos, 1 American, 1 Indian, 1 Kenyan, and 1 Ugandan), as well as one postulant brother and 4 pre-seminarians.

Like the old saying claims: You can’t argue with success!