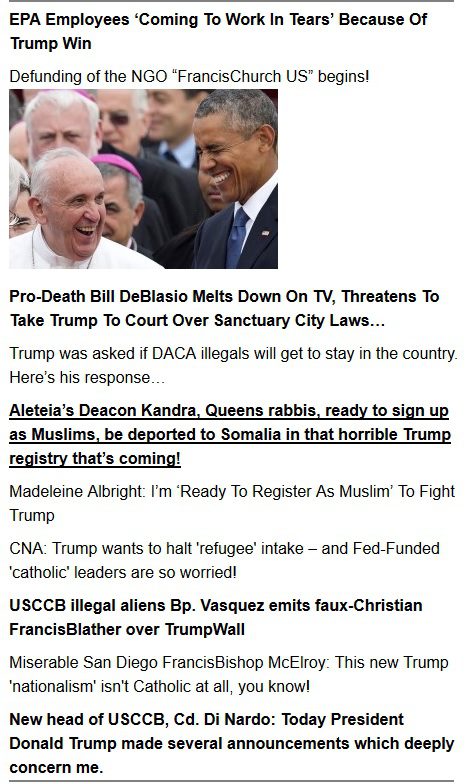 As you dear readers must know by now, that once a commercial or ecclesiastical entity loses its ability to function, e.g. stops paying its bills, one of two things can happen. Either it asks for and receives a capital injection after some sort of restructuring program is executed, or it goes into liquidation.

The reason that I mention this today, is due to the observable fact that the post-conciliar church in the United States of America has begun to lose one of its main financing sources. This loss is due to the Executive Order signed by President Donald J Trump (love how that sounds…) to defund the “Sanctuary Cities”. In other words, the Trump Administration will “attempt to strip municipalities of federal dollars for shielding illegal immigrants threaten(ing) $2.27 billion in annual funds for the nation’s 10 largest cities”, as per the Fake News Legacy Media outfit Reuters. (see here)

We can also observe (and read in the photo at the top of this page) that a very broad cross-section of the US Catholic Bishops and FrancisBishops did not take this news too well. (see here) The reason being that they are a major recipient of funding from the “sanctuary cities” programs.

Further bad news that needs to be kept in mind is that another source of funding for the post-conciliar church’s subsidiary known as FrancisChurch, is in jeopardy of vaporizing. This funding source comes by way of the “private” Non-Government Organizations, that support the politics of uncontrolled migration and its operational elements, i.e. the Human Trafficking Industry, an industry of which the post-conciliar church is an integral part. (see here)

News of just this fact comes by way of the excellent catholic website Zero Hedge. In a post titled JC Collins: “Canada Must Ban George Soros Foundations Now!”, the author lays out very succinctly the operational elements of this funding source.

To be more precise, what JC Collins does is explain in less than 1000 words, how one and the most likely key player in this NGO sector, i.e. George Soros … shall we say: makes the doughnuts. I will not go into further detail, but the post is a must read to understand the much bigger funding problem that the post-conciliar church and it’s smaller subsidiary the FrancisChurch, is facing. The reason being that sovereign governments have caught onto this racketeering operation and are beginning to rectify it, as per post.

Which brings me to the subject matter of this post. What I have done is provide below, a schema for what EACH AND EVERY PARISHONER, be they Catholic, catholic, “c”atholic or apostate MUST KNOW going forward.

Furthermore, it is critical that all my readers spread this post around to their co-religionists and especially to the clergy. This is essential information since this is what is coming down the road in the newly devolved FrancisChurch USA and the better everyone is prepared for this eventuality, the better one will come out at the end of this process.

Concluding and on a positive note, what I also need to convey to you dear reader, is this: EVERYONE MUST understand that it is the Holy Spirit that is guiding this process. The Holy Spirit has decided that the Great Chastisement is necessary and He is executing it. From our side, the individual Faithful Catholic must be cognizant, as he or shee is working out his or her salvation in fear and trembling, that he or she will wake up one day and be in a new reality. But we know that the “gates of hell shall not prevail”, just as Our Lord promised, which means that we will come out of this just fine.

On an aside, a look into what this new reality will look like, can be obtained from information put out last year by one of the new FrancisBishops appointed to one large, asset rich yet cash poor US diocese, whose surrogates have been desperately sending out solicitation letters for contributions even before The Donald’s victory and even more intensly as I write this. (see here)

Below is the schema of how the FrancisChurch Liquidation going forward will look. I have (annotated) and highlighted the key parts to make it more understandable.

And finally, PREPARE, PREPARE and once again PREPARE because… this scenario above is just as inevitable as 2+2 must equal 4, or as inevitable as the Trump victory in the last Presidential Election!

One reason why I wrote the above post, is to get my readers to start thinking about what the situation could look like for the Faithful in the near to not too distant future. One manner in which to not get surprised by the unfolding events,  is to prepare for this eventuality and to be ready to take over (purchase) your parish’s tangible assets from your local diocese or religious order when the time comes.

To that end, one good source that I have just located, where one can obtain information with respect to what the real estate would/could be worth, is the following web site:  http://www.loopnet.com/Churches-For-Sale/

So get at it and due your market research! 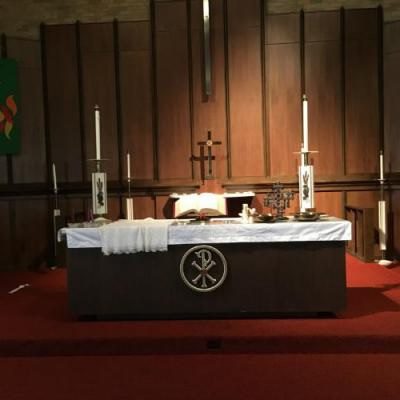 How to liquidate (wind up) a company (see here)

Liquidation (or “winding up”) is a process by which a company’s (diocese’s) existence is brought to an end.

What are the different types of liquidation?

The law classifies liquidations into two types: voluntary (which is by a shareholders’ resolution) or compulsory (by a court order).

Liquidations are also classified according to whether the company is solvent or insolvent.

If the company is insolvent, this means it is unable to pay its debts as they fall due. In this situation there is potential conflict between creditors (those to whom money is owed), as there will be insufficient assets for all creditors to be paid in full.

The law attempts to maintain an equality between creditors, so the assets are distributed proportionately according to the size of each creditor’s claim. However, the law gives priority to secured creditors (those with a charge over some of the company’s property as security for the debt). In addition, a number of rules exist to prevent one or more creditors from gaining an unfair advantage.

A voluntary liquidation may also by commenced by the board of directors if an event specified in the company’s constitution has occurred.

Compulsory liquidation of a company requires obtaining a court order. This process starts with an application to the court alleging that one or more of the required grounds exist. The application may be brought by the company or a majority of its directors, or by the Registrar of Companies, or by a creditor. Applications by creditors are by far the most important and common.

The procedure for liquidation

Broadly speaking, the liquidation process is as follows:

What are the consequences of liquidating a company?

The main consequences of the company being liquidated are as follows:

Order of distributing the company’s assets

There is a hierarchy that determines the order in which a company’s assets must be distributed in a liquidation. (NB: It would be a good thing to identify any creditors so as to be able to negotiate or even purchase their debt (at a discount) during the eventual liquidation sale.) This is strictly enforced by the Courts. Any secured creditors have the first right to the assets and are usually paid out before there is a distribution. After this is paid out, any remaining debts are paid in the following order of priority:

15 thoughts on “Schema For The Upcoming FrancisChurch USA Liquidation. (Updated)”