Who remembers “bar-hopping” in their younger, wilder days?

Today, your humble blogger will do a variation of this cultural phenomenon and go “blog-hopping”.

The reason we are blog-hopping today is to make a point. The point that I want to make is that over the life of this blog, your humble blogger has learned one very important lesson. And that lesson is that Catholicism is not limited to the ecclesiastical sub-set of the et Invisibilium.

So today, we start with the ecclesiastical, move on to law enforcement and end up at government budgetary policy. The most important take-away from this blog-hop is to see how the dots are connected.

First, the ecclesiastical. Below is a post from the blog Dad29. It would appear that Archbishop Listecki, the ordinary of the Archdiocese of Milwaukee is acting out of character. To be more precise, it would appear as if Abp. Listecki is addressing a “problem” that doesn’t exist. NB: See what happens when you suppress Thomism? But I digress… I have added emphasis to the relevant passage: (see original here)

Abp. of Milwaukee No Fan of “The Wall”

In the letter he considers The Donald’s actions vis-a-vis refugees from the Middle East and illegal immigrants from Mexico.

The Archbishop “would invite the President to prayerfully reconsider any attempt at a permanent refugee ban.”

Odd.  So far as we know, the President has not brought up a “permanent” refugee ban.

“I would also respectfully ask the President whether the construction of a wall on the US and Mexican border is the most appropriate way to achieve the security sought by a democratic society.”

Well, I can’t say that I am now (nor ever was) a “wall-freak.”  But every time we hear about more opioid deaths, (with most of that heroin coming over the southern border) a wall becomes more attractive.

It appears that the Archbishop was pushed–hard–to make some sort of statement.  Well, he did.  Think that will be enough for the Voces de la Frontera crowd?  (Hint:  nope.)

So it would appear as if Abp. Listecki knows something that the rest of us do not, or that he is trying to preempt a future immigration policy directive.

Or it might be that Abp. Lisecki is aware of the following, as presented on the Washington Times blog (all newspapers are in essence blogs these days…) (see here)

Numbers made it worst January in records dating back to 2012

Illegal immigration across the southwest border plummeted in January, compared to December, as the flow of both illegal immigrant families and children traveling alone dried up, according to numbers released by Customs and Border Protection on Monday.

The numbers are still high compared to past years — indeed, it’s the worst January in records dating back to 2012.

But total apprehensions of migrants trying to sneak across the border fell 27 percent on a month-to-month basis, to 31,575. And the number of inadmissible migrants who showed up at the southwest’s ports of entry fell 28 percent, to 10,899.

Apprehensions are deemed an indicator of the overall flow: The more people caught, the more are believed to be getting through.

The flow always decreases in the deep months of the winter, before picking up again in the spring. Last year Border Patrol apprehensions dropped 36 percent from December to January.

“CBP continues to maintain a strong security posture through background checks of all individuals encountered and ensures that each person is processed in accordance with U.S. immigration laws and DHS policy,” the agency said.

The number of Cubans showing up to demand entry fell from nearly 5,000 in December to just 1,572 in January, as President Obama’s new Cuban policy kicked in Jan. 12. Under that policy, those who are caught on U.S. soil are no longer entitled to special treatment.

But the number of Haitians demanding entry ticked up in January, suggesting a renewed flow from that nationality. Tens of thousands of Haitians fled their island country over the last decade, heading to South America. But over the last year they’ve started trying to gain a foothold in the U.S., enticed by what they saw as lax enforcement policies.

So what we can infer from the two above posts is that Abp. Listecki has noticed a (statistically) significant drop in illegal immigrants that are presenting themselves at the diocesan facilities that process and support such individuals.

Now we know that this is a reasonable inference to make due to the work of Elizabeth Yore, pertaining to the government funding received by the various “religious” organizations for helping out these illegal immigrants. Actually, we have produced several post on just this subject matter. As a matter of fact, the last one was titled Defunding The NGO “FrancisChurch USA” Begins!.

And just to support the above contention that the defunding of the FrancisChurch USA NGO is proceeding as we speak, we get this post from The Gateway Pundit blog. In the post titled… we read the following:

By comparison, under President Obama, the US Debt burden increased by more than $200 billion in his first month in office.  Obama increased the US Debt by 2% in his first month and signed the trillion dollar ‘Stimulus’ bill which is widely considered a colossal failure and waste of US tax dollars as well.  The failed ‘Stimulus’ did not kick in till later in Obama’s first year leading to Obama’s first year deficit of $1.4 trillion.  Overall Obama doubled the US Debt during his Presidency and set records for highest deficits and the largest debt increase by any President ever. 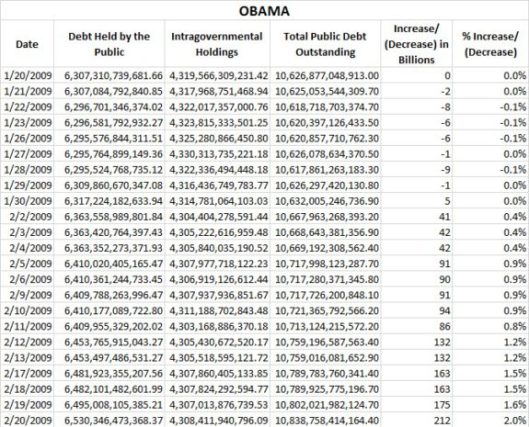 And The Donald is just getting started.

Which should suggest to the competent ordinaries in these here United States of America that it just might be time to develop a ECCLESIASTICAL FUNDING MODEL!

Maybe a funding model used by these folks here…

But that just could be me…

And that comes on the back of proposed “deep” cuts in the EPA and the Department of Education.

And we  still haven’t gotten to the “unofficial” State of the Union Address.

Pray and fast for President Trump. God is definitively working through this wretched sinner.

NB: And just so that we are all clear here, remember folks: when the government suppresses God, it becomes god. Which is why The Donald is in fact doing God’s work.