Today your humble blogger is back from a short business trip and what does he find?

Jordan B. Peterson is still “all the rage”.

Below is a republication from William F. Buckley Jr.’s National Review that still, from time to time contains a good post.

Today’s subject matter deals with the Deus ex Machina thread about how Dr. Jordan B. Peterson can save the post-conciliar church from itself and maybe even help turn the Barque of St. Peter around. This is the proper CONTEXT for reading this post below.

The post by David French itself, is a very well written piece which touches on the dynamic between the secular and the sacred aspects of reality, while indicating the RECONCILIATION POINT where these two sides of what we call ONTOLOGICAL REALITY come together.

The author rightly places Dr. Peterson at the center of the RECONCILIATION POINT.

Furthermore, this material is quite timely since we are approaching another consistory where Francis will be creating 14 new FrancisCardinals. What Francis is doing is stacking the deck with hierarchs who he thinks will elect the “son of Francis” after he is no more.

Yet like in all successions, the outcomes can never be known, no matter how scripted the plan going into the conclave.

From our end, what we Faithful Catholics need to do is keep praying, fasting and….

SHOUTING FROM THE TOP OF OUR LUNGS the OBJECTIVE TRUTH that FRANCIS IS AN EPIC FAILURE.

And no better way can be had to demonstrate just how EPIC of a FAILURE Francis is, than by showing pictures of the General Audience attendances. Above is one from the 16th of May, 2018.

The OPTICS speak for themselves…

Sustainable, this is not!

And now, onto the National Review post (see original here) 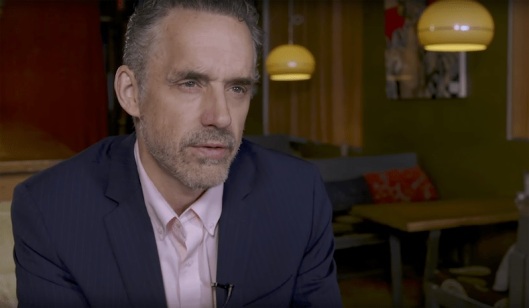 There’s room for a Christian counter-offensive in secular culture.

Rarely in my life have I read a more hostile or vicious takedown of a public figure than last week’s New York Times profile of Canadian author and psychologist Jordan Peterson. Rarely have I witnessed a more bizarre and bad-faith interview of a public figure than journalist Cathy Newman’s January interrogation of Peterson on Britain’s Channel 4 News. Few public figures inspire more vitriol and mockery on Twitter than, you guessed it, Jordan Peterson. And never before have I seen vitriol so out of proportion to the “threat” of the man’s underlying message.

I don’t claim to be an expert on everything the man’s said, but I read and reviewed his most recent book, 12 Rules for Life: An Antidote for Chaos, and I’ve watched many of his most popular YouTube videos — and the contrast between the actual content of his message and the rage and mockery it elicits never fails to surprise me. Have we really reached the point where the basic argument that men and women are different, or that free men and women will often make different choices in large part because they are different, or that religion and ancient traditions can inform and guide our lives today, are now so toxic that their advocates must and should face a relentless campaign to drive them from the public square?

Or, given the obvious crisis that young men face — with rising rates of suicide and drug overdose, and diminishing educational outcomes — why the extraordinary hostility to a man who is reaching those same young men with a message of hard work, personal responsibility, honor, and integrity?

After all, if you’re a theologically conservative Christian or Jew — a person who is Biblically literate and strives to live according to Biblical morality — the flaw of the Peterson message is that it feels a bit basic. As I wrote in my review, “readers who are already grounded in a Biblical worldview will find some of the counsel extraordinarily elementary.”

But that’s the issue. If Peterson were writing to a Christian audience, he’d be one voice among many. An interesting and quirky voice, to be sure, but his core message about men and women would be conventional, not revelatory. Instead, however, Peterson stands out because he is playing in the Left’s cultural sandbox. He’s disrupting an emerging secular cultural monopoly with arguments about history, tradition, and the deep truths about human nature that the cultural radicals had long thought they’d banished to the fringe.

Then, when people actually respond to that message, the shock is even more seismic. It’s difficult to overstate the extent to which the Left has long been (and, crucially, felt) culturally ascendant in America’s secular spaces. The academy, pop culture, mainstream media, corporate America — all of these spaces have drunk deeply of the Left’s cultural Kool-Aid, especially when it comes to matters of sex and gender. The holdouts are in the church and synagogue, and their borders are shrinking under relentless cultural assault.

That’s the arc of history, you see, and the only place where its ultimate triumph was in doubt (or, more precisely, delayed) was in politics — and those setbacks were transient and temporary until the “coalition of the ascendant” could claim its rightful place at the pinnacle of political power.

The problem, however, was a failure to thrive. The new culture left too many young men behind. The new, fractured family claimed too many lives. When “deaths of despair” are so prevalent that the world’s wealthiest and most powerful nation now faces declining life expectancies, it’s hard to argue for the unqualified success of the modern leftist cultural project.

And so, as the secular Left pressed up against the church, it looked behind and saw the flames in its own camp. Peterson held the match, but the kindling was all around him. It’s not that men (and many women) failed to adjust to the new gender ideologies, it’s that the new gender ideologies too often fail to reckon with our deepest human longings and fail to recognize our fundamental human nature. As Peterson writes in 12 Rules, “We cannot invent our own values, because we cannot merely impose what we believe on our souls.”

No one should believe that Peterson is always right, or that his every utterance is profound, but he has served a truly invaluable cultural service. His success and — critically — his method, which relies as much on scripture as it does on psychology, should serve as a clarion call for Biblical Christians and Jews. There is no need for the defensive crouch. In the spiritual wasteland of secularized America, the harvest is plentiful, and ancient truth can indeed provide the seed for new beginnings.

2 thoughts on “EpicFailureFrancis: Sustainable, This Is Not…”