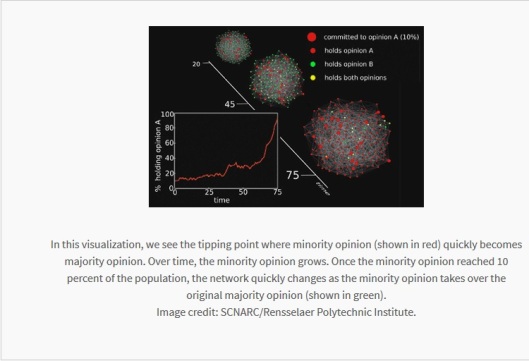 Reason being that information has come across the radar that is of major significance for the Deus ex Machina methodology. As my long time readers know, when analyzing data, one key aspect of any analysis that can be considered “worth its salt” is the model’s predictive ability.

And with the Deus ex Machina’s Peirce/Ockham pragmatic model, one key aspect that has always served it well is the model’s predictive ability. The best example is that the model accurately predicted that Donald J. Trump would win the US presidential election in a landslide. This prediction was made as early as July 2016. Here is a visual of what in fact the DeM POPM predicted: 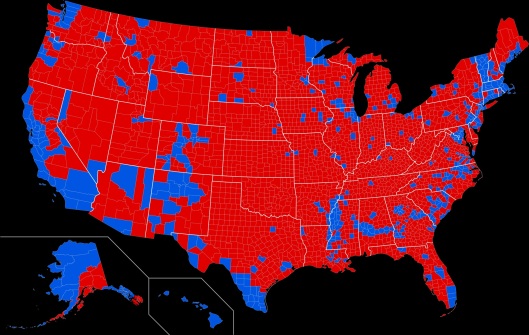 The above is a map by county. If it was reduced to the precinct level, more than half of the “blue area” would be wiped out. That’s how badly Sick, Crooked, Unelectable Hillary lost by in the 2016 presidential election, and the Peirce/Ockham model predicted it.

Yet one aspect of the model’s predictive ability, let’s call it a “shortfall”, was that it couldn’t gauge at what point the Trump victory became irreversible. I assumed that there was a natural phenomenon, such as a learning curve along which the momentum to vote for Trump moved along, that would allow one to identify a “point of no return” whereby when reached, there was no turning back.

And then I came across this post, which I have republished below.

So today, we will re-arrange the normal order of my posts, and conclude after you dear reader read the post.

FOR THE RECORD: (see original here)

Scientists at Rensselaer Polytechnic Institute have found that when just 10 percent of the population holds an unshakable belief, their belief will always be adopted by the majority of the society. The scientists, who are members of the Social Cognitive Networks Academic Research Center (SCNARC) at Rensselaer, used computational and analytical methods to discover the tipping point where a minority belief becomes the majority opinion. The finding has implications for the study and influence of societal interactions ranging from the spread of innovations to the movement of political ideals.

As an example, the ongoing events in Tunisia and Egypt appear to exhibit a similar process, according to Szymanski. “In those countries, dictators who were in power for decades were suddenly overthrown in just a few weeks.”

The findings were published in the July 22, 2011, early online edition of the journal Physical Review E in an article titled “Social consensus through the influence of committed minorities.”

To reach their conclusion, the scientists developed computer models of various types of social networks. One of the networks had each person connect to every other person in the network. The second model included certain individuals who were connected to a large number of people, making them opinion hubs or leaders. The final model gave every person in the model roughly the same number of connections. The initial state of each of the models was a sea of traditional-view holders. Each of these individuals held a view, but were also, importantly, open minded to other views.

Once the networks were built, the scientists then “sprinkled” in some true believers throughout each of the networks. These people were completely set in their views and unflappable in modifying those beliefs. As those true believers began to converse with those who held the traditional belief system, the tides gradually and then very abruptly began to shift.

“In general, people do not like to have an unpopular opinion and are always seeking to try locally to come to consensus. We set up this dynamic in each of our models,” said SCNARC Research Associate and corresponding paper author Sameet Sreenivasan. To accomplish this, each of the individuals in the models “talked” to each other about their opinion. If the listener held the same opinions as the speaker, it reinforced the listener’s belief. If the opinion was different, the listener considered it and moved on to talk to another person. If that person also held this new belief, the listener then adopted that belief.

“As agents of change start to convince more and more people, the situation begins to change,” Sreenivasan said. “People begin to question their own views at first and then completely adopt the new view to spread it even further. If the true believers just influenced their neighbors, that wouldn’t change anything within the larger system, as we saw with percentages less than 10.”

The research has broad implications for understanding how opinion spreads. “There are clearly situations in which it helps to know how to efficiently spread some opinion or how to suppress a developing opinion,” said Associate Professor of Physics and co-author of the paper Gyorgy Korniss. “Some examples might be the need to quickly convince a town to move before a hurricane or spread new information on the prevention of disease in a rural village.”

The researchers are now looking for partners within the social sciences and other fields to compare their computational models to historical examples. They are also looking to study how the percentage might change when input into a model where the society is polarized. Instead of simply holding one traditional view, the society would instead hold two opposing viewpoints. An example of this polarization would be Democrat versus Republican.

The research was funded by the Army Research Laboratory (ARL) through SCNARC, part of the Network Science Collaborative Technology Alliance (NS-CTA), the Army Research Office (ARO), and the Office of Naval Research (ONR).

The research is part of a much larger body of work taking place under SCNARC at Rensselaer. The center joins researchers from a broad spectrum of fields – including sociology, physics, computer science, and engineering – in exploring social cognitive networks. The center studies the fundamentals of network structures and how those structures are altered by technology. The goal of the center is to develop a deeper understanding of networks and a firm scientific basis for the newly arising field of network science. More information on the launch of SCNARC can be found at http://news.rpi.edu/update.do?artcenterkey=2721&setappvar=page(1)

Szymanski, Sreenivasan, and Korniss were joined in the research by Professor of Mathematics Chjan Lim, and graduate students Jierui Xie (first author) and Weituo Zhang.

Now I would like to take you dear reader back to a post that appeared on the 3rd of September, 2016. The post was titled Satanic Council – The End Game w/Updates!, where Bishop Fellay, Superior General of the Society of St. Pius X relates the following information:

It means that there are now in the Church, so serious problems, so threatening problems for the existence of the Church, that the Congregation for the Faith is forced to revise their position with us.

At the time, I was not very happy about these things but with the time, with reflecting, yes they are facing enormous problems and suddenly what appeared to be the problem that is us, maybe it looks like a solution. (Return to Tradition)

We have counted that there are between 26 and 30 cardinals who have openly attacked these modern positions. And numerous bishops. They say that to the point that we have lost the monopoly on the contestation of the protest, … (First time that this number was mentioned before the non-SSPX blogosphere put it out.)

It’s a catastrophe for the Church, but it’s good, it’s good that finally there is a reaction. It’s high time. And this reaction is growing. And now you have to reflect.

We’ve been told that at the last meeting of the Congregation of the Faith, where they all meet together, all the cardinals and bishops which are members, we call that a plenaria, this is the full meeting, there was only one cardinal who said, ‘no, no. no, the Society must absolutely accept the whole council’. And other voices who said ‘these people do only one thing, (that is) to repeat what the Church has always taught’. So you see, there is something on the move…

Concluding, I will leave off here. But one final parting thought.

One of the unstated reasons for writing this blog is to identify what is OBJECTIVE REALITY, with a specific interest of all things Catholic. One conclusion that can be drawn from the above is this:

IF: All but one member of the Congregation for the Doctrine of the Faith think that a return to Tradition can solve the current existential crisis,

GIVEN: That when the number of committed opinion holders grows above 10 percent, the idea spreads like flame, and passes the tipping point where a minority belief becomes the majority opinion,

THEN: The Vatican hierarchy has passed the point of no return whereby they accept that the post-conciliar ideology is causing the disintegration of the Catholic Church and the resolution of the existential crisis is a return to Catholic Tradition.

Folks, the above is the OBJECTIVE REALITY.

And this is why Francis is terrified!

I will leave it here for today.

Please reflect on the above.

And also reflect on the following: 1) why is Francis clamping down on any hint of discent behind the Sacred Vatican Walls, 2) why are the same people always being appointed to the different Vatican organizations, i.e. think +Paglia, Baldisarri, Forte, 3) why is Francis willing to die on the +Barros/sexual deviants hill, 4) why is Francis “speeding up” his attempted destruction of the post-conciliar church?

24 thoughts on “What Terrifies FrancisChurch, Whether They Know It Or Not… (w/Update)”