This blogger would like to state for the record that he could not identify any error in Miss Barnhardt’s reasoning, logic, or conclusion.

And finally, Miss Barnhardt’s conclusion is in line with the analysis of this humble blogger, which resulted in a conclusion that has been provided on the Deus ex Machina blog in the post on the 5th of August, 2016 titled: 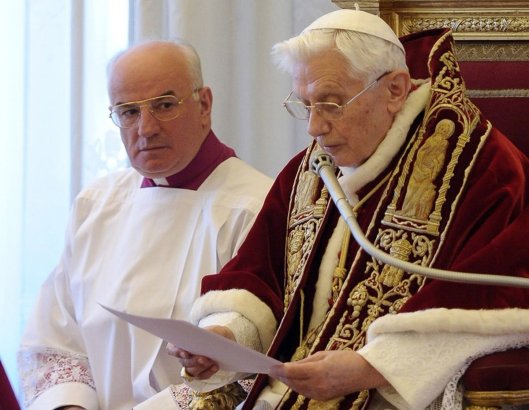 Recently, the noted Vatican theologian, and former member of the Congregation for the Faith, Msgr. Nichola Buxpublicly opined that the validity of the resignation of Pope Benedict XVI should be studied in regard to the question of what appears to be substantial error in the formula of resignation.

Msgr. Bux was not the first to raise this issue. There was a very noteworthy study published by a Professor in canon law at the Theological Institute of Legano, Switzerland, in 2014 by Fr. Stefano Violi, which discussed canonically the renunciation: The Resignation of Pope Benedict XVI Between History, Law and Conscience, without, however, raising the question of its invalidity. (Its a must read on account of its rich citation to the canonical history of papal resignations.)

However, on June 19, 2016, Anne Barnhardt raised specifically the question of a doubt arising from