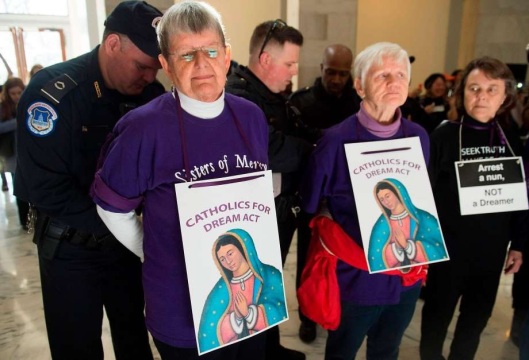 Over the last couple of days, your humble blogger has been posting on the subject of #FAKE NARRATIVES. And just as a quick refresher, fake narratives based on #fakenews create a VIRTUAL REALITY that is then used in a GASLIGHTING PROCESS to convince the gullible viewer that what he is seeing is in fact real.

The problem with virtual realities is that they are not sustainable. The reason being that they do not conform to OBJECTIVE REALITY. And as has been pointed out time and again, eventually… 2+2 must equal 4.

The PROCESS by which the various virtual realities meet objective reality is through what we have labeled as the CONVERGENCE PROCESS.

So over the last few days, we have been identifying some of the CONVERGENCE PROCESSES that are playing themselves out in real time. One is what is known as the OBAMAGATE where the VIRTUAL REALITY is being played out by Special Council Mueller while the OBJECTIVE REALITY is being defined by the three Congressional Committees and the Inspector General.

Another CONVERGENCE PROCESS has played itself out this past Sunday in Italy where the VIRTUAL REALITY had the populist 5 Star Movement locked in a tie with the major post-Communist Leftist party, namely the Partito Democratico (PD) at roughly 28% of the vote respectively. And when this VIRTUAL REALITY was reconciled with OBJECTIVE REALITY, namely the Italian voters, it turned out that 5 Star Movement had 32% while the PD didn’t even get 19% of the vote. Needless to say, this threw the entire post election government forming process into a unknown scenario since the most votes were, unexpectedly received by the Center Right coalition represented by Matteo Salvini, Giorgia Meloni and Silvio Berlusconi.

And finally, another instance in which this CONVERGENCE PROCESS is presently playing itself out, and one first identified many, many months ago by your humble blogger is what can be called the Jordan Peterson PHENOMENON. Since November and December of 2016, this blog has observed and chronicled the intrinsic Catholic nature of the subject matter of the clinical psychologist Jordan Peterson’s lectures and various talks. Dr. Peterson’s work can be viewed as the OBJECTIVE REALITY that he is attempting to discern while the post-conciliar FrancisTheology of Death ™ would be the VIRTUAL REALITY that is heading head long into a collision with OBJECTIVE REALITY. The support for the above HYPOTHESIS would be that this intrinsic Catholic nature of Dr. Peterson’s work is now being recognized by individuals and publications who specialize in the theological and ecclesiastical sub-set of the Visibilium Omnium.  (see here, here and here just to mention three)

So today your humble blogger transitions to the ECCLESIASTICAL side of the Visibilium Omnium and shine the disinfecting sunlight onto the above identified VIRTUAL REALITY.

Over at Father Z’s blog we find a post titled Pew Research Center looks at Pope Francis’ numbers 5 years into his pontificate. Drilling into the source document of this post, namely the Pew Research poll, we find the following table: 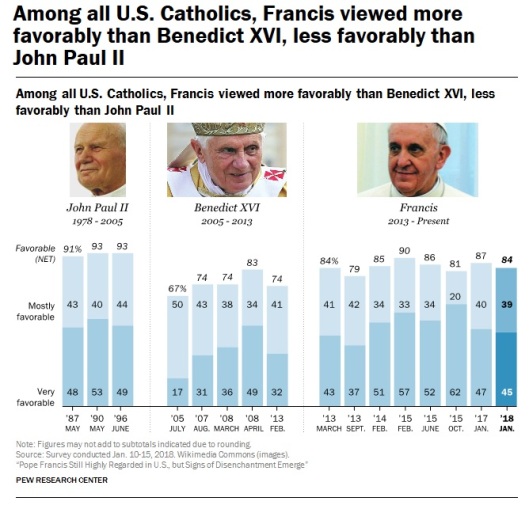 Yet we know from our sensory data, i.e. observations from the crowd sizes at the FrancisEvents at St. Peter’s Square, that the crowd size estimates taken by the Vatican officials are running at less than 30% of those crowds that were present for similar events under the previous two Pontiff’s.

So it would appear that there is a disconnect.

Further, in that same research post, we get the following graphs: 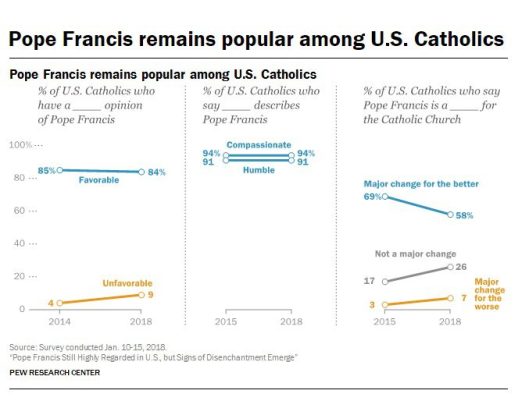 The above graph could be understood to represent what could be called the “internal” components of the research results. And these internals are showing the following:

Several observations about the above percentage change table.

First, over the time period measured, the general satisfaction with Francis’ tenure at  the bishopric of Rome can be characterized by strong evidence of “dissatisfaction”.

Among those who were “favorably disposed” toward Francis in 2014, we see a slight decrease of this favorability ratings (-1%) and a larger drop in the opinion that Francis is a “change agent for the better (-16%).

Among those who presently view Francis’ reign as unfavorable, that number more than doubled (+125%) and those who saw Francis as a “change agent for the worse”, well this group increased by the most (+133%).

The second observation is with respect to the absolute values represented in this poll. If we return to our post titled What Terrifies FrancisChurch, Whether They Know It Or Not… (w/Update), the following passage appears:

So if we were to assume that those respondents to the Pew Research poll who hold an unfavorable opinion of Francis (9%) and who think that his bishopric of Rome is a major change for the worse (7%) are those who can be classified as “committed opinion holders”, then what we are seeing is the approach to that 10% tipping point that the researchers from the SCNARC identified.

Concluding, it is unfortunate that we have no data about what proportion of those 9% of the respondents who hold an unfavorable opinion of Francis or those 7% of respondents who think that this bishopric of Rome is a major change for the worse, can be classified as “committed opinion holders”.

However, we can observe the reaction by the decision makers behind the Sacred Vatican Walls to any developments that arise from within this “dissatisfied opinion holders” subset of the Faithful. Here are just three recent examples:

The Escalating War Against Orthodox Catholicism

Buzzfeed Does A Hit Piece on Father Z

Therefore, what can be observed is that the threat of Tradition to the status quo, post-conciliar FrancisChurch is being treated so seriously, that the powers that be have reached out to the mainstream #fakenews, corporate owned media to try and shore up their #FAKENARRATIVE.

Yet, these desperate actions also contain an embedded SIGNALING EFFECT. What is being signaled is a demonstrable  weakness of the post-conciliar position. An example of this is a very powerful cardinal instructing the Faithful not to call him, TeamFrancis and Francis himself HERETICS.

A further sign of the weakness is the overt threats that appear almost daily. Here is one of the latest ones, a threat that Francis is getting ready to change the Traditional Calander and Lectionary to destroy the Traditional Latin Rite.

And then there are the young…

So all in all, looks like the “young (at heart)” FrancisChurch is rapidly heading toward its tipping point…

Wonder if the Cardinals are watching?